Rudy Giuliani: Republicans Would Steal Elections ‘If They Controlled The Inner Cities’ 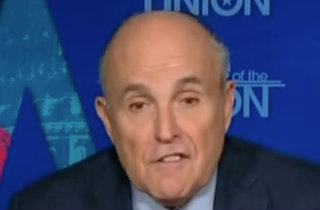 On Sunday anorning, while making the rounds of the news shows, Donald Trump surrogate and former New York City mayor Rudy Giuliani appeared on CNN’s “State of the Union” with host Jake Tapper. In the final part of the interview, the topic turned to Trump’s various claims that the presidential election is rigged/will clearly be rigged if he doesn’t win. The most revealing moment arguably came right at the very end, when Giuliani posited that Republicans generally don’t steal elections like he claims Democrats do, but only because they don’t have the opportunities.

“There are a few places, not many, in the swing states, there are a few places where they’ve been notorious stealing votes,” claimed Giuliani. “Pennsylvania, Chicago, there have been places where a lot of cheating has gone on over the years. I know that from my own knowledge of bussing people in from Camden[, New Jersey]…when I ran for mayor of New York City, the first time, some people voted eight and ten times. The second time I had firefighters and police officers outside checking on the buses. So we take down the number of bus[es], bus that voted 10 times, and then we wouldn’t let the bus vote again.”

Tapper wasn’t buying it: “So he’s not talking about elections being stolen, except in some cases where he is.” Giuliani claimed to have seen cases of similar electoral fraud during his decades as a prosecutor, including the allegation that “dead people generally vote for Democrats.” Then, when Tapper had to wrap up the segment, this happened (emphasis ours):

Tapper: “We have to go, Mr. Mayor, but just to put a button on this, you are saying that Trump is serious when he says that the election’s gonna be stolen.”

Tapper: “You just laid out a whole case about how democrats steal elections.”

Eventually Giuliani clarified that he was saying that “If it’s a one or two point race, it could make a difference in a few places.” Tapper then argued that what Giuliani said is “not an affirmation of how our elections are held in this country,” only for the guest to double down that people cheat in American elections. Then there was this:

Tapper: “I think there are a lot of election experts that would have very strong disagreements with you.”