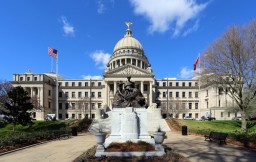 Yes, you read the title correctly. The Mississippi legislature has reintroduced a bill that would allow the state prison system to use a more humane alternative to death by lethal injection: death by firing squad.

At a January press conference in which he laid out his legislative agenda, Mississippi Attorney General Jim Hood announced he was looking for death penalty alternatives should lethal injection be ruled unconstitutional. He mentioned death by nitrogen hypoxia (less painful asphyxiation), electrocution, and firing squad, and stated that he would ask lawmakers to approve such alternative methods if the state itself prohibits lethal injection.

State Representative Robert Foster, a Republican, believes that the firing squad is a more humane, effective and less costly option than lethal injection. Foster added that he believes the vast majority of Mississippi residents would support an optional firing squad.

The new proposal comes on the heels of a U.S. Supreme Court ruling in January which determined that Florida’s death penalty law and sentencing scheme was unconstitutional.

Utah is the only other state in the U.S. that permits capital punishment by firing squad.