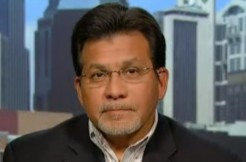 “If judges and the trials over which they preside are not perceived as being impartial, the public will quickly lose confidence in the rule of law upon which our nation is based,” Gonzales said in an opinion piece for The Washington Post.

Curiel presides over a federal lawsuit that claims Trump University is a scam. Since February, Trump himself has been openly criticizing the judge, saying he’s skeptical because Curiel is Hispanic, or as Trump put it last week, “Mexican.”

“I’m building a wall [to separate the United States from Mexico],” Trump told CNN’s Jake Trapper on Friday, trying to explain why Curiel is biased.

Gonzales insisted he’s not criticizing Curiel’s impartiality, including terms of race and ethnicity. He’s points to his own Mexican heritage, writing, “I know ethnicity alone cannot pose a conflict of interest.”

But he said Curiel’s link to one organization can give Trump legitimate concern.

“Curiel is, reportedly, a member of a group called La Raza Lawyers of San Diego,” he wrote. “Trump’s aides, meanwhile, have indicated that they believe Curiel is a member of the National Council of La Raza, a vocal advocacy organization that has vigorously condemned Trump and his views on immigration. The two groups are unaffiliated, and Curiel is not a member of NCLR. But Trump may be concerned that the lawyers’ association or its members represent or support the other advocacy organization.”

Gonzales also says Curiel appointed the Robbins Geller law firm to represent the plaintiffs in the Trump University case, albeit this happened before The Donald started his presidential campaign. As LawNewz.com first reported, this firm has paid over a half-million dollars in speaking fees to Democratic presidential frontrunner Hillary Clinton and her husband, former president Bill Clinton.

“Regardless of the way Trump has gone about raising his concerns over whether he’s getting a fair trial, none of us should dismiss those concerns out of hand without carefully examining how a defendant in his position might perceive them—and we certainly should not dismiss them for partisan political reasons,” Gonzales said.

The lawsuit, one of several connected to Trump University, is ongoing.
–