Legal Experts Side With Trump; It Would Be Crazy to Release His Taxes During Audit 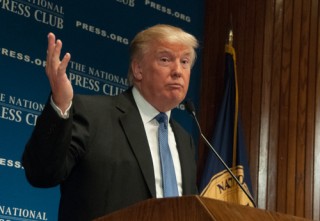 Donald Trump is not backing down. He is not releasing his taxes until after he says a federal audit is complete. He was pushed on the topic again Friday morning on Good Morning America.

“Almost every lawyer will tell you the same thing, when you are under audit, you finish the audit before you release,” he said.

As George Stephanopoulos pointed out in a rather heated interview, there is technically nothing legally barring Trump from releasing his taxes. The IRS even said in a statement  “nothing prevents individuals from sharing their own tax information.” While Trump has sometimes been quick to say legal experts side with him, on this one, we have to say it is true. Tax attorneys who spoke with LawNewz.com said they would advise their clients not to release  taxes in the midst of an audit.

In February, when this issue was first brought up by Trump’s Republican opponents, we reached out to high profile tax attorneys and accountants who typically deal with high-net worth individuals.  We posed two questions to them: 1) What would you advise your clients?  2) Do Trump’s statements (above) seem like a plausible explanation to you?

Here are their responses:

“I see some of my colleagues would tell their clients to release their tax returns to the public during an audit. Ask them to name a single client they actually gave that advice to. I think that would be legal malpractice, and would recommend their clients sue them if they gave that advice. I advise my clients (hundreds over the years who actually experience an IRS inquiry) to NEVER release their tax returns while an audit is going on.  I am certain Mr. Trump’s lawyers, very capable and well-respected in this field, have advised him not to disclose his tax returns during the audit. There are many reasons for this.

First of all, and most importantly, the IRS is not allowed to show your client’s tax returns to anyone else. Such returns are protected by the privacy laws of section 6103 of Title 26 of the Code. The only way they could do so if your client had a lawyer dumb enough to let you disclose those records publicly. The IRS could then misuse this otherwise private information to make the audit process more difficult at many levels, and could cause problems for other entirely innocent businesses you do business with.

Second, releasing the returns during an audit could cause anyone who has a grievance with you to misuse the released information, and try to intervene in the audit process, for their own personal, financial or political gain. I have been through this several times in other contexts where such records were obtained by people with an interest adverse to my client, which unnecessarily protracted the process as undue expense and harassment of my client.

Third, tax returns usually reveal business strategies that may need revision during the audit process, for which untimely disclosure could unduly hinder and harm, with third parties often the victim as much as the client.”

“I would absolutely advise a client not to release returns under audit to the public. Critics could pull certain items on the returns out of context and there would be political pressure on the IRS to scrutinize those items even if they ordinarily wouldn’t be controversial.
Lots of transactions span several tax years so he is also right that one years return may be intertwined with another.”

Robert Mckenzie, a Chicago based attorney:

“I would advise my client that there could be huge risks in releasing complex returns during an audit. Instead of having just an IRS agent review the return it now would be reviewed by  thousands of tax experts.  The first step his opponents would take would be to assign the best tax accountants and tax lawyers on his team to analyze the returns. In addition, reporters would seek out tax experts to review the returns. (I reviewed Mitt Romney’s, Dennis Santorum’s and Newt Gingrich’s returns last cycle at the request on a national publication.) All the comments would lead the agent to more and more issues. On the other hand the political damage of a failure to release may out weigh the risk of a larger tax deficiency.”

“To answer your question, yes, this could be a plausible explanation.  In an audit of a particular tax year, prior tax years can be called into question as well.  Sometimes tax-related statutes of limitations will prevent such an inquiry (but not always).  I imagine that Donald Trump is well advised from a tax perspective, particularly since his business roots are in real estate development.”

“If his return is under audit, I would advise not to release it to the public as there could be an embarrassing upward adjustment or they could “bless” the return by not making any changes which would be an affirmation of the accuracy of the return (or they could make a highly unlikely downward adjustment).  Either way, it would not be beneficial to release the return until all was settled.    If the return was not under audit, then it is up to him what he wanted to do, but given it is under examination, it would be prudent to wait until the examination has been concluded.

As Mr. Trump stated, he has been audited year after year, presumably the audits on prior years have been concluded, therefore those returns, if he so chose, could be released and as stated above, if there was an upward adjustment, an embarrassment, if there was a “no change”, an affirmation.  He might have a few years where the audit has not been concluded, so as above, I would recommend they not be released. ”

“I have practiced tax law and tax controversy for 30 years. I worked also for IRS Chief Counsel and have represented many taxpayers in private practice.  I firmly believe it shouldn’t matter that Trump is under audit — Trump should disclose his returns. A presidential candidate has to disclose his or her tax returns and is always at risk for audit of that return.  That is the whole point.  When you file a return, you sign it and are supposed to submit it in good faith and consistent with legal requirements.  It’s an admission by you, you are laying out on paper your financial circumstances as they relate to taxes.  Whether or not you are under a current audit is irrelevant, because your position would be and should be that your return as filed is accurate and complies with the law. Your signature is in a sense saying that what and how you’ve reported your income and deductions, etc. is entirely legitimate and unquestionably accurate. In spite of the audit, you should be essentially standing by what you submitted as being true and correct.  The IRS will not disclose what issues are being examined, but honestly anyone can look at a Presidential Candidate’s return and do their own evaluation of what it contains and whether or not something is questionable.  That would happen anyway, even if there was no audit.  That’s why the return is made public.  If Donald Trump filed his returns accurately, he should disclose them without any excuses. Whether or not he has been, is currently or will be audited in the future is not relevant to the imperative that he should disclose his returns as filed if he wants to become President.  I can only surmise that perhaps there indeed is a “bombshell” in there that Mr. Trump doesn’t want anyone to see right now as it will slow his momentum during the primaries.  I believe he is using this audit as lame excuse not to disclose the returns he signed and filed.”

Editor’s Note: Interviews with the tax experts first appeared in a February post on LawNewz.com