Lawsuit Says Mississippi Flag is ‘Hate Speech’; and It Might be True 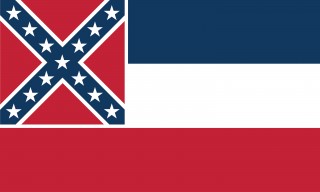 Mississippi still just doesn’t get it. Allow me to clarify: it’s not every person in the State of Mississippi who is willfully blind to the racist forest for the historical trees. It’s the state itself – embodied by its leaders and lawmakers.

After last year’s shooting in Charleston, South Carolina, several Mississippi municipalities and the University of Mississippi wisely removed the state flag from government property. So it looked like there was some progress afoot. But shortly thereafter, the Mississippi legislature did what it does best: wasted taxpayer money. Twenty-one pieces of legislation were proposed (some to keep the old flag, and others to change it), $2 million was spent getting the issue to a vote, and in the end, nothing was changed.

People, this is state government at its worst. Mississippi is the poorest state in the country. Using $2 million in government funds to do something that should have been done a hundred years ago is as wasteful as it is disturbing. The fact that plenty of Missippians prefer to cling to their disgusting history of oppression and hatred is irrelevant; like it or not, the Confederate flag is a symbol of slavery. That reality is hardly undercut by the fact that many people find historical value in it.

There’s nothing legally wrong with individuals using the Confederate flag as a symbol of pride and heritage. People are free to fly the Confederate or any other flag on their private property as proudly as they wish. That’s all protected under the First Amendment. But invoking the Confederacy by a state government itself is an entirely different matter.

Last week, on Flag Day, a group called “Take It Down America” rallied in front of the U.S. Capitol, publicizing a recent lawsuit filed by Carlos Moore, alleging that use of the Confederate flag by Mississippi in its state flag is discriminatory hate speech. I’m not sure Mr. Moore is going to win the lawsuit, but certainly get his point.

Under First Amendment law, it’s not enough for statements (or in the case of flag-flying, symbolic speech) to amount to “hate speech.” To lose Constitutional protection, the speech would need to predictably incite immediate violence – meeting the legal standard for “fighting words.” From a legal perspective, it’s doubtful that a general flying the Confederate flag would rise to the level of fighting words. But as is so often the case, context matters. A reasonable American could easily dream up scenarios in which a Confederate flag appropriately and peacefully celebrates Southern history, and alternative ones in which that same flag would light the fuse to a generations-old powder keg.

Which brings me to Mississippi. Whether the majority of Mississippians love or hate the flag doesn’t matter. What does matter is Mississippi’s brazen disregard for the known effect of this flag. Many Americans both inside and outside Mississippi loathe the Confederate flag, and for good reason. A symbol so indisputably controversial is simply inappropriate as part of a state flag. A symbol that represents not only bigotry, but also secession from the United States is not appropriate on a state flag.   Such a conclusion hardly requires a referendum; it’s just common sense.

Even if things didn’t work out in the legislature as he’d hoped, Mississippi Governor Phil Bryant was determined to get some political mileage out of this flag issue.   In a characteristically insensitive gesture, Bryant issued a proclamation designating April as Confederate Heritage Month.

When I think about a state governor taking official action to celebrate and ceremonialize the losing side in the Civil War, I’m irritated. When I view that choice in the larger context of recent Southern legislation, I am honestly frightened. Mississippi — with its anti-LGBT laws, its lawsuit against the U.S. Justice Department, and its backward abortion regulations – is making a statement. It doesn’t wish to follow American laws, American sensibilities, or American authority. It makes up its own rules and it’s proud to do so. This election season, those on both sides of the political spectrum are understandably frustrated by candidates who have refused to accept their own losses. In our politicians, it’s easy to see this behavior as what it is: immature, narcissistic and sometimes dangerous. Flying the losing flag of a dispute over human bondage and national unity is just as direct an arrow to the heart of American democracy.