How Embarrassing! Time to Change the Rules and Let CSPAN Control Cameras 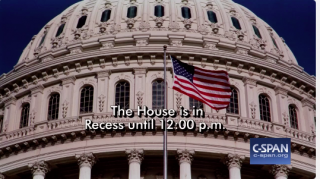 For decades, CSPAN has been asking to install its own cameras onto the floor of the U.S. House of Representatives. Why was this such a priority? So we can see members’ reactions during a debate. So we can see the empty chambers if no one shows up for debate. So the American people can have more transparency when it comes to understanding how our government works. CSPAN has even offered to share its feed without charge to any media organization credentialed by Congress! But nope, that never happened.

C-SPAN has no control over the U.S. House TV cameras.

Guess who rejected the organization’s repeated requests? Every single politician over the years. I mean both Republicans and Democrats, including Representative Nancy Pelosi. Kind of ironic considering it’s now the Democrats raising hell over the turned off CSPAN cameras. In fact, Sen. Elizabeth Warren even called it “shameful.”

Hero @repjohnlewis is leading a sit-in on gun violence & @SpeakerRyan shut off the camera so you can’t watch. Shameful. #NoBillNoBreak

I can’t help but think that all of these politicians are a bunch of hypocrites when it comes to this issue. The repeated decisions to bar CSPAN from controlling cameras on the floor never really got much press. This week, the Democrats’ sit-in on the House floor over gun bills has put this issue front and center. The fact that CSPAN and other networks were forced to air bootlegged Periscope and Facebook Live videos of a historic moment is just embarrassing. As the current rules stand, Rep. Paul Ryan has “control” of the cameras, and turns them off when the House is not in session. In fact, there are a lot of “rules” when it comes to the Congressionally controlled cameras.

In 2011, a request by CSPAN to bring cameras in the House was also rejected by former Speaker John A. Boehner: “I believe the American people—and the dignity and decorum of the United States House of Representatives—are best served by the current system of televised proceedings provided by the House Recording Studio,” Boehner wrote, according to The Washington Post. Dignity? Decorum? Welcome to the 21st Century. These politicians need to wake up. There is nothing legally barring them from allowing CSPAN to take over.

In a letter to Nancy Pelosi from January 2007, CSPAN founder Brian Lamb wrote:

You may be interested to know that last month the Speaker of the British House of Commons announced that their long-standing restrictions on cameras shots in the British House would be permanently lifted following a two-month trial period. In the announcement, their Speaker said that going forward, the private media cameras that televise the Commons would employ “a great use of reaction shots in order to illustrate the mood of the House.”

That request to Pelosi by CSPAN was also rejected. If the Brits, who arguably are more steeped in tradition and rules, can allow “private” cameras into the British House of Commons, we have no excuse. After reading his well-reasoned pleas to Congress over the years, I have a new found respect for Brian Lamb, the founder and former CEO of CSPAN.

“We continue to feel the public is best served by seeing a more complete picture of the legislature process that what’s delivered by the Congressionally-controlled cameras,” CSPAN wrote in 2011. Amen.