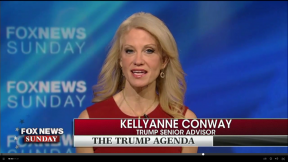 The Republican congressman said the White House must refer the matter to the Office of Government Ethics for review. He said he and Democratic Oversight Leader Elijah Cummings are writing a letter to the office and he will also write to President Donald Trump about the matter.

“It needs to be dealt with,” he told The Associated Press. “There’s no ifs, ands or buts about it.”

Chaffetz was referring to Conway’s Thursday interview with Fox News in which she boasted she was giving the president’s daughter “a free commercial here” and urged viewers to “Go buy Ivanka’s stuff.”

A spokesman for the White House says that comments by President Donald Trump’s nominee for the Supreme Court were taken out of context.

Citing former Sen. Kelly Ayotte, who is helping with Gorsuch’s confirmation, Spicer said Gorsuch was commenting in general about attacks on the judiciary.

He said that Gorsuch was “asked about his general philosophy.”

Gorsuch’s confirmation staff and three senators have confirmed the remarks.

A White House spokesman says top adviser Kellyanne Conway has been “counseled” after she urged people to buy Ivanka Trump products during an interview on Fox News.

Sean Spicer says: “She’s been counseled, and that’s all we’re going to say.”

Conway spoke on Fox News Thursday morning from the White House briefing room. She encouraged people to “go buy Ivanka’s stuff.” She made the comments a day after Trump attacked Nordstrom on Twitter for dropping his daughter’s fashion line.

While Trump himself is not subject to the standards of ethical conduct for federal employees, Conway is. Among the rules: An employee shall not use his or her office “for the endorsement of any product, service or enterprise.”

President Donald Trump is having dinner at the White House Thursday night with one of his biggest financial backers, casino mogul Sheldon Adelson.

That’s according to two people with direct knowledge of the dinner, which was first reported by The Washington Post.

Adelson and his wife, Miriam, contributed more than $20 million to a super PAC that aired pro-Trump and anti-Hillary Clinton advertising in the final weeks before Election Day.

The couple are close with former House Speaker Newt Gingrich. They received prime seats for Trump’s swearing-in last month and — in a highly unusual bit of access — also attended a congressional lunch afterward with the new president and lawmakers.

Trump’s relationship with Adelson was late-blooming. During the Republican primary race, Trump ridiculed his opponents for being puppets of Adelson.

-By Julie Bykowicz and Julie Pace

President Donald Trump has summoned 10 senators to the White House to urge them to confirm his Supreme Court nominee.

Trump is meeting at the White House with both Republicans and Democrats, and telling them Judge Neil Gorsuch is “exceptionally qualified” and has “great intellect.”

The president also is repeating his assertion that comments Gorsuch made appearing to distance himself from Trump were — in Trump’s word — “misrepresented.”

Democratic Sen. Richard Blumenthal of Connecticut says Gorsuch told him that Trump’s critical comments about a judge who ruled against his refugee and immigration ban were “demoralizing” and “disheartening.”

Former New Hampshire Sen. Kelly Ayotte, who’s working with Gorsuch on the confirmation process, later said Gorsuch was speaking broadly about any criticism of judicial independence, and not about a specific case.

Democrats are accusing Judge Neil Gorsuch of engaging in a White House “ruse” by criticizing President Donald Trump’s attacks on the courts.

Gorsuch has told Democratic Sen. Richard Blumenthal of Connecticut and others that he found Trump’s criticism of a federal judge “disheartening and demoralizing.”

But the Democratic National Committee calls it “a meaningless White House-orchestrated attempt” to help the Supreme Court nominee “pretend he won’t be a rubber stamp” for the administration.

And Senate Democratic leader Chuck Schumer says Gorsuch is only showing “a desire to appear independent.”

Trump has disputed Blumenthal’s characterization of Gorsuch’s remarks, even as Gorsuch’s White House-appointed handlers confirmed them.

Schumer tells reporters that Puzder’s record as CEO of fast food empire CKE Restaurants Inc. disqualifies him from advocating for workers as the head of the Labor Department.

Senate Democrats have come forward with another former employee of Puzder’s company who says she was mistreated. Puzder has said he’s committed to becoming a member of President Donald Trump’s Cabinet.

Puzder took another step toward confirmation this week by submitting required ethics forms to the Senate ahead of his Feb. 16 hearing.

He says he’ll avoid conflicts of interest by divesting from more than 200 companies if he’s confirmed. President Donald Trump has not divested from his business empire.

The White House says the leaders will discuss “strengthening the relationship” between their countries.

Trump has said he wants to discuss his wish to overhaul the North American Free Trade Agreement, which involves the United States, Canada and Mexico. Trump has said NAFTA puts U.S. workers at a disadvantage.

Trump’s refugee and immigration ban may also come up in the discussions with Trudeau.

Trudeau said “diversity is our strength.”

The New York Democrat says Neil Gorsuch made the remark when they met privately Tuesday. It is remarkable for a president’s nominee to chide him.

On Wednesday, Connecticut Democratic Sen. Richard Blumenthal said Gorsuch told him Trump’s criticisms of the judiciary were “demoralizing and disheartening.”

Trump tweeted Thursday that Blumenthal “misrepresents” what Gorsuch said. Trump offered no reason for his claim.

Conway tells Fox News that Trump is a “successful businesswoman” and people should give the company their business.

President Donald Trump launched a Twitter attack against Nordstrom on Wednesday after the Seattle-based retailer dropped his daughter’s clothing and accessory line. Trump says his daughter has been treated “so unfairly.”

Trump has tweeted about companies such as Boeing, Carrier and General Motors. But ethics experts say this time is different because it involves a business run by his daughter — and that raises conflict-of-interest concerns.

Trump tweeted Thursday that McCain “should not be talking about the success or failure of a mission to the media. Only emboldens the enemy!”

He added that McCain has “been losing so long he doesn’t know how to win anymore, just look at the mess our country is in — bogged down in conflict all over the place.”

McCain is a Vietnam veteran and former prisoner of war who lost the 2008 presidential election to President Barack Obama. The Arizona senator won re-election in November.

McCain said Wednesday that any operation where a $75 million airplane is lost, a Navy SEAL is killed, and there are multiple casualties, including women and children, “cannot be labeled a success.”

An adviser to President Donald Trump says the president is “fully confident” in his Supreme Court nominee.

Kellyanne Conway said Thursday on “Fox and Friends” that Trump wants judges “to express their own independence,” after his extended criticism of the judiciary prompted a rebuke from Judge Neil Gorsuch, his pick for the Supreme Court.

Conway echoed comments made earlier by Trump, casting doubt on the credibility of Connecticut Democratic Sen. Richard Blumenthal, who first relayed remarks Gorsuch that Trump’s criticism of the judiciary is “demoralizing and disheartening.”

Trump’s own confirmation team for Gorsuch later confirmed the comments.

Conway said that “the judge has been misrepresented.”

She said, “Blumenthal has had a credibility problem” after inaccurately saying he’d served in Vietnam. Blumenthal apologized for his misstatements in 2010

A Republican former senator confirms comments by the president’s Supreme Court nominee, though the president suggests those comments were misrepresented.

GOP former Sen. Kelly Ayotte is helping with Gorsuch’s confirmation and was at the meeting.

She issued a statement saying Gorsuch made clear he was not referring to any specific case. But she said the nominee said he finds any criticism of a judge’s integrity and independence to be “disheartening and demoralizing.”

But Trump tweeted Thursday, “Richard Blumenthal, who never fought in Vietnam when he said for years he had (major lie), now misrepresents what Judge Gorsuch told him?”

Blumenthal faced criticism in the past for saying he had served in Vietnam. Blumenthal served in the Marine Corps Reserves during Vietnam. He apologized in 2010, saying he regretted his misstatements.

President Donald Trump’s extended criticism of the judiciary has prompted a rebuke from his nominee for the Supreme Court, who told a senator the president’s comments were “demoralizing and disheartening.”

Judge Neil Gorsuch, who was nominated by Trump to the nation’s high court last week, made the comments Wednesday after Trump accused an appellate court considering his immigration and refugee executive order of being “so political.” During the weekend, the president labeled a judge who ruled on his executive order a “so-called judge” and referred to the ruling as “ridiculous.”

Gorsuch’s comments came at the end of his first full week of meetings in the Senate, which is considering his nomination.