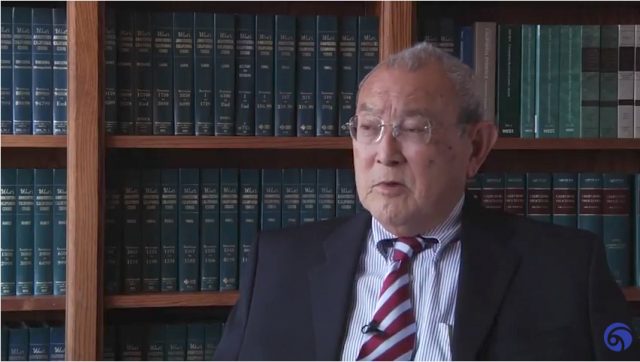 A federal judge in Arizona has ruled the state’s high-profile ban on ethnic studies programs was racially discriminatory in nature. That ruling means the ban is unconstitutional and therefore unlawful.

U.S. District Judge A. Wallace Tashima found that Diane Douglas, Superintendent of Public Instruction in the State of Arizona, violated the First and Fourteenth Amendments by enforcing the ban which was used solely to target the Mexican-American studies program in the Tucson Unified School District.

The ban–enacted the same year as Arizona’s similarly controversial “show me your papers” law–was widely viewed as the product of racial discrimination against Hispanics.

The plaintiffs in the case–teachers and students impacted by the ban–argued that their First Amendment right to receive information was violated in order to accommodate the racially charged views of resentful whites whose anger was being whipped up and exploited in order to achieve short-term political gain. Judge Tashima more or less agreed with that characterization of the ban. In the ruling, he wrote: “Both enactment and enforcement were motivated by racial animus.”

The opinion also singled out former superintendents Tom Horne and John Huppenthal, Arizona Republicans who had been at the forefront of the campaign to dismantle Tucson’s Mexican-American studies program. The ruling noted that neither man had ever seen a single class being conducted in person. Rather, they had blithely railed against purportedly subversive bugbears embedded in the curriculum in an effort to manufacture racial division–and score political points–by calling for and celebrating the ban. Tashima wrote:

Both individuals conveyed an unfounded, yet uniform, distrust of MAS teachers’ and students’ accounts of what was taking place in MAS classrooms … Defendants were pursuing these discriminatory ends in order to make political gains. Horne and Huppenthal repeatedly pointed to their efforts against the MAS program in their respective 2011 political campaigns, including in speeches and radio advertisements. The issue was a political boon to the candidates.

Bolstering his finding that the ban was motivated by racial hatred, Tashima noted a series of blog comments made by Huppenthal. In one, he claimed: “Mexican American Studies classes use the exact same technique that Hitler used in his rise to power.” In another he said: “No spanish radio stations, no spanish billboards, no spanish tv stations, no spanish newspapers. This is America speak English. I don’t mind them selling Mexican food as long as the menus are mostly in English.”

Tashima noted: “Huppenthal’s blog comments provide the most important and direct evidence that racial animus infected the decision to enact A.R.S. § 15-112. Several of his blog comments convey animus toward Mexican-Americans generally … Huppenthal’s usage of pseudonyms also shows consciousness of guilt. Had Huppenthal, a public official speaking in a public forum on a public issue, felt that his inflammatory statements were appropriate, he would not have hidden his identity.”

Though the ban has been overturned, it’s unclear what exactly will become of it. A hearing will be held in the coming weeks to decided how the order will be enforced.