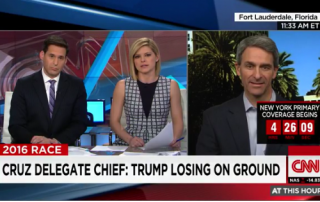 Meanwhile, Cuccinelli cited a number of the Trump campaign’s tactics he claims the campaign has used, including “calling for violence in the streets, their team threatening intimidation of delegates at their hotel rooms…death threats to the Colorado GOP chair.” Cuccinelli said Trump is doing just what he’s accusing Cruz’s camp of doing. He described Cruz’s campaign as “a grassroots campaign that’s built on Ted’s vision for greater opportunity and freedom.”

When asked how he goes about “twisting arms” of delegates, Cuccinelli objected to the phrasing, saying “your bias is naked to everyone watching.” He said, “We ask people nicely,” adding, “You know what the goodies we’re promising people are? They can have their Constitution back.” He claimed there is no evidence that the Cruz campaign has done anything underhanded.