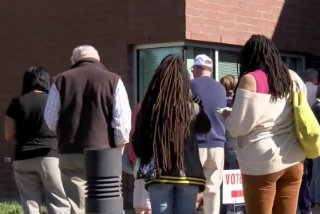 In one of the first of what could be many stories of delays on Election Day, officials in Durham County, North Carolina are claiming that the computers used to confirm voter registrations have failed. Greg Lacour reports for the Washington Post that as a result, Durham has had to pull out the paper backups, with Durham County Board of Elections interim director Kate Cosner telling him that she and the state board of elections are “both in agreement” that “using paper all day … the old-fashioned way” would be “the best way to go.”  This only affects voter check-in, as Durham users paper ballots for vote tabulation.

The news quickly drew skepticism on social media for multiple reasons. Lacour’s article drew attention because of how it was worded, saying that “the laptop computers that precincts were using to verify voter registration had malfunctioned in all 57 precincts.” When reached for comment via Twitter, the county clarified that there were problems identified in six counties, with the check-in system provider currently trying to isolate the cause:

@davidbix VR Systems is looking into it now. We've had 6 locations report problems so as precaution going to paper poll books.

(Lacour’s article has since been updated to read “that some of the laptop computers that precincts were using to verify voter registration had malfunctioned.”)

In addition, he tweets from the official Durham County account drew replies from residents . For example:

Durham County leans heavily towards the Democratic Party (about 55.8% of the population)and has a large black population at about 38% in the most recent census (the percentage of registered voters is higher, at about 40.2%). Since the North Carolina Republican Party sent out a press release on Monday bragging about decreased early voting among the state’s black population, any irregularities in the state are going to draw even more scrutiny.