Why Donald Trump Will Not Be Impeached 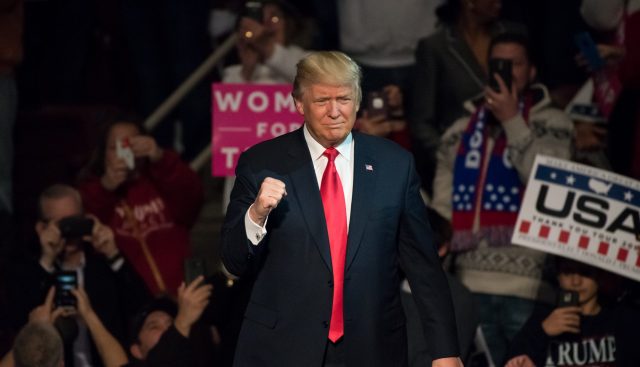 A chorus of Democrats have been speaking out against President Donald Trump’s Executive Order temporarily blocking refugees from seven countries from entering the country, and indefinitely blocking Syrian refugees from entry. While a stay from the order is in the hands of the 9th Circuit Court of Appeals, many have used this action, along with others by the President, to talk about actual impeachment of the president. Congressman Joaquin Castro of Texas expressed that if the President ignored the stays, this could make articles of impeachment against him appropriate. In response to whether she was calling for impeachment, Rep. Maxine Waters, liberal stalwart from California, stated that even though she was not calling for impeachment yet, “he’s doing it himself,” intimating that the President’s actions, and the related public outcry, are putting impeachment in play. Despite Congressman Castro’s declarations, a look at the Clinton impeachment, as well as the current political climate, indicates impeachment of our current President is highly unlikely.

Impeachment involves bringing of charges of misconduct against a public official. To impeach the President, he would need to be accused of “high crimes and misdemeanors.” Each charge is called an “Article of Impeachment.” Impeachment of the President does not ensure conviction, and removal from office. With a majority vote in the House of Representatives, an article or articles is then brought to trial in the Senate. The Senate needs to approve conviction, and therefore removal, by a two-thirds margin (67 out of 100). In recent history, President Bill Clinton was impeached by the House of Representatives in 1998, accused of perjury and obstruction of justice arising out of the Monica Lewisky scandal. The House sought to bring other charges, a second perjury charge and a charge of abuse of power, which did not pass to the Senate for trial.

Today, Republican majorities exist in both the House and the Senate. Republicans’ goal, of course, is to give the Republican President every opportunity to succeed. Therefore, while President Trump’s self-destruction may be a problem they cannot remedy (even if a real concern), they will do all they can to not contribute to the President’s demise themselves. Therefore, Republicans will not impeach the President for political reasons.

When impeachment charges were brought against President Clinton, it was done by a House with a Republican majority that had only been in charge for 4 years after decades of Democratic control. Though President Clinton was impeached, all 45 Democrats in the Senate (and a handful of Republicans) voted for acquittal in the trial, which assured that there would be no two-thirds majority for conviction and removal. As things stand currently, securing enough Republicans to pass the charges threshold in the House would be hard, let alone getting enough votes in the Senate to help get to a two-thirds majority (which would require some 20 Republicans to join with all of the Democrats).

With the above in mind, any Republican that sought to bring articles of impeachment against the President would be committing political suicide, no matter how justified they may feel. There are many people, including Republicans, that do not approve of aspects of Mr. Trump’s activity, but that does not translate to support for impeachment. More, a Democrat who sought to impeach the president with support only along party lines would be seen as just making a political point, and nothing more. Also, despite the unique, and perhaps never previously seen, challenges that President Trump presents, Impeachment is still considered a “nuclear” option not brought haphazardly by anyone, regardless of party.

Even if one could argue for impeachment, politics dictates that it would not happen anytime soon. Just like many other politically risky endeavors, Congress would be more likely impeach the President during a lame-duck session; i.e., following an election, not at the beginning of a Congressional term, where we are now. President Clinton was impeached in December 1998, a month after the mid-term elections. Even then, the major architect of the impeachment, House Speaker Newt Gingrich, resigned from Congress a month afterward.

Trump vs. the Media

There are a couple of necessary preconditions for impeachment to take place. First of all, there must be conduct that is reprehensible enough to draw bi-partisan disgust and disappointment; second, there must be a groundswell of public support that emboldens leaders to actually advocate for and bring impeachment charges. President Clinton, in his own version of “alternative facts,” alleged he did not have sexual relations with Monica Lewinsky. Everyone could agree that his conduct in the White House was reprehensible, let alone potentially lying about it under oath.

To be sure, President Trump, through both his campaign, and the early days of his administration, has demonstrated a tenuous relationship with the truth. Also, there are arguments about whether he is already at (or beyond) the fringes of his constitutional authority. That said, neither a partially (or fully) unconstitutional executive order nor a “play on words” (not said under oath and described as political spin) makes for an impeachable offense. Also, consider that, from day one, the Trump Administration has declared war against the media, with the goal being to undermine the media and create distrust for even truthful reporting. To the extent the administration succeeds in this pursuit, the widespread belief the President engaged in impeachable activity and the related public groundswell becomes far less likely.

President Trump’s personality and temperament will continue to create much to talk about, and perhaps even to complain about, as his administration proceeds. We may even continue to hear cries of impeachment. However, as things currently stand, in all likelihood, we will not see it occur.

Joseph Richardson, Attorney at Law, practices in California at the Law Offices of Borton Petrini,  www.bortonpetrini.com.