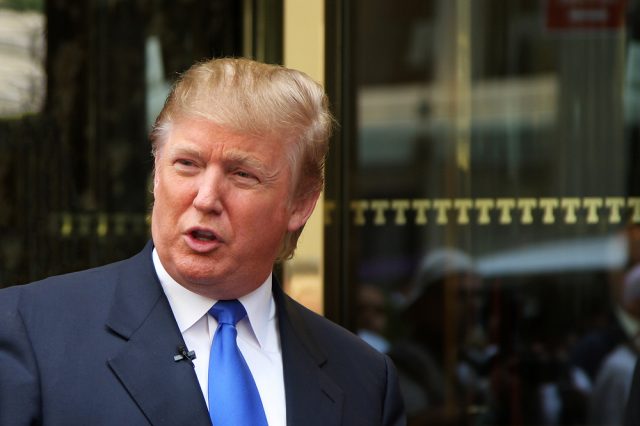 Since President Trump took office, there has been quite a lot of debate over whether his business dealings constitute violations of the “Emoluments Clause” and whether if so, such violations could be grounds for impeachment. Legal experts disagree over whether foreign dignitaries paying for a suite at Trump Tower would constitute the kind of “emolument” (any compensation, gift, or other form of profit or gain) for which Congress would be required to give its blessing, or about whether the president counts as a person “holding office” under that part of the Constitution. But with all the focus on Article I, we have overlooked an even more glaring problem. One, that could also be grounds for a possible impeachment of Donald Trump. In fact, this one might be the best argument to date to get him out of office.

“The President shall, at stated Times, receive for his Services, a Compensation, which shall neither be increased nor diminished during the Period for which he shall have been elected, and he shall not receive within that Period any other Emolument from the United States, or any of them.”

“No title of nobility shall be granted by the United States: and no person holding any office of profit or trust under them, shall, without the consent of the Congress, accept of any present, emolument, office, or title, of any kind whatever, from any king, prince, or foreign state.”

Congress can sanction an emolument that comes from a foreign government. But when we’re talking specifically about POTUS, and we’re talking about his profiting domestically, it’s always a “no.” And even a Republican Congress can’t help. The president gets a salary, and that’s it. End. Of. Story.

I hate to get all historical, but the framers of the Constitution weren’t just being redundant with these two clauses; they prohibited the president from accepting domestic money because they knew there was a risk that some states would try to buy their way into sweetheart deals with the federal government. Of course, it would be tough to tell whether a president took some particular action because he was paid off to do so, or whether he did so because it was simply a good idea. And that’s the reason we have the domestic emoluments clause in the first place. Because the clause absolutely prohibits the president from accepting anything other than salary, it eliminates the need for us to ever question a president’s motivation. The framers may not have been able to imagine golden skyscrapers and the Twittersphere, but they did understand corruption. They were smart that way.

With Trump, there’s quite a bit more than risk that he’ll line own pockets during his presidency – there is overwhelming proof that he already has. For starters, he’s arranging to rent space in Trump Tower to the Department of Defense. You’d think that as the owner, Trump might just comp some rooms to the feds, but with the going rate for a floor being about $1.5 million a year, no such luck. Lt. Col. J.B. Brindle, a Pentagon spokesman, told The Washington Post:

“The space is necessary for the personnel and equipment who will support the POTUS at his residence in the building.”

And Brindle is talking about the DOD, not the Secret Service, which will also be renting top-dollar space in Trump Tower. Just to be clear, presidents acting like landlords to the rest of the federal government isn’t a thing. Richard Painter, former chief White House ethics counsel under George W. Bush, told the Chicago Tribune:

“I have never heard of a president charging rent to the DOD or any other part of the government so they can be near him on his travels. He should give them for free a very limited amount of space and they can rent nearby if needed.”

Rented hotel space isn’t the only domestic emolument likely to come Trump’s way either. Through his real estate endeavors, Trump has already been the recipient of close to a $1 billion in tax breaks from New York State alone. When New York continues to offer such breaks, those will be emoluments. If other states follow suit with their own gifts of tax benefits for Trump International’s projects, those will be emoluments too. And when Celebrity Apprentice gets its own financial incentives, we can add them to the list.

For those on impeachment-watch, violations of this other emoluments clause may well be the smoking gun for which they’ve been looking.  Interpretation and applicability of the Foreign Emoluments Clause is hazy at best, especially given the lack of clear precedent.  The Domestic Emoluments Clause, on the other hand, is quite a bit clearer in its language and purpose.  Whether President Trump has actually violated the clause, and whether such a violation would constitute an impeachable “high crime or misdemeanor” remains to be seen — but, who knows, the DOD’s mini-bar tab just might be what brings down this presidency.