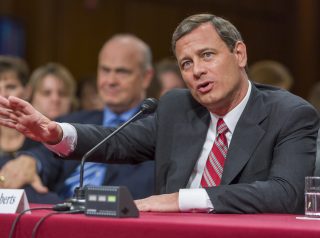 On New Year’s Eve, Chief Justice John G. Roberts Jr. released the 2016 Year-End Report on the federal judiciary. The report – a sort of judicial State of the Union address – contained just the kind of mix of history, statistics, and stately language one expects from the Supreme Court. The National Law Journal pronounced that the report “displayed no sharp edges or fodder for controversy,” and the Washington Post wrote that Roberts “continued to steer well clear of controversy in the report.” All that is certainly true. But when I leafed through the report’s fourteen pages as 2016 came to a close, I couldn’t help but read a little of what had to be Justice Roberts’ real meaning.

“As winter approached in late 1789, Justice David Sewall of the Massachusetts Supreme Judicial Court received unanticipated correspondence from President George Washington. Washington informed Sewall that he had been appointed and confirmed as United States District Judge for the District of Maine, then still part of Massachusetts. The matter was not open to discussion; Sewall’s commission was enclosed.

Writing from his home in York, Sewall noted that the appointment was “unsolicited and unexpected,” President Washington appointed all thirteen original United States district judges in like fashion, and most responded with similar humility and trepidation.”

What The Chief Justice Actually Meant:

Listen up, guys. The rest of the federal government may be a who’s-got-the-more-monolithic-ego contest, but federal judges are dignified, humble, and understated. In other words, the federal judiciary is like the Adele in a sea of Kims, Kanyes and Mariahs.

“The men and women across the country who today serve as district judges are generally not well known either, but they deserve tremendous respect. While the Supreme Court is often the focus of public attention, our system of justice depends fundamentally on the skill, hard work, and dedication of those outside the limelight. This year, I would like to recognize the crucial role federal district judges play in the operation of the Third Branch and highlight some of the challenging and often overlooked facets of their service.”

While you jackasses are still yapping about what RBG should and shouldn’t have said to the New York Times, there are hundreds of district court judges who make this whole thing called “justice” happen. So before you start opening your pie holes about who should replace Scalia, it’d be a good idea if you considered for more than a nanosecond what actually happens in federal courtrooms.

“Congress has authorized 673 district judgeships, as well as four territorial positions. The active judges receive assistance from more than 500 senior district judges, who are eligible for retirement with full pay but still continue to work—most in a part-time capacity, but many full-time—without additional compensation.”

Congress managed to approve almost seven hundred judges this year, but it couldn’t figure out how to get Merrick Garland confirmed. Lame. And while we’re at it, I’d like to point out that unlike Congressmen, who get paid for life no matter how meager their accomplishments, judges stay on the bench even after they’ve hit retirement age. They’re basically working for free, and they’re not complaining about it. In fact, you wouldn’t even know about that if I hadn’t just told you. So if you want to talk about work-ethic, make an appointment with my clerk.

“Unlike politicians, [judges] work largely outside of the public eye. Most Americans have some sense of their role, but that perception has surely been shaped, for better and worse, by movie and television portrayals of the American jury trial. In the typical depiction, the trial judge has a bit part, sitting passively amidst the soaring rhetoric of the 4 attorneys, the heroism or villainy of their clients, and the moral compass of the jurors. Real-life trials usually lack that drama—but then they are not meant to be entertainment. Rather, they are carefully structured mechanisms for resolving legal disputes through an adversarial process. In conducting trials, the district judge serves as the calm central presence to ensure fair process and justice for the litigants.”

The judiciary is serious business, people – more serious than most pea-brained Americans can even fathom. We may have an incoming president who is filling his cabinet by using the same formula used to cast Celebrity Apprentice, but we’re here to remind you that there are no cameras in federal court. This isn’t a circus, and we’ll thank you to direct your clowns and fire-eaters toward the White House and Capitol buildings where they’ll be more at home.

“The judge is responsible for supervising the important pretrial process and conducting the trial itself. He resolves discovery disputes, manages the selection of the jury, rules on the admission of evidence, determines the proper and understandable instruction of the jury, and resolves any issues surrounding the acceptance of the verdict and entry of judgment. Each of those steps requires special knowledge, sensitivity, and skill. The judge must have mastery of the complex rules of procedure and evidence and be able to apply those rules to the nuances of a unique controversy. As the singular authority on the bench, he must respond to every detail of an unscripted proceeding, tempering firm and decisive judgment with objectivity, insight, and compassion. This is no job for impulsive, timid, or inattentive souls.”

Fun as it is to discuss whether a judge is “pro-life,” or “soft on crime” or “pro-gun,” the actual job of judges is to know how to manage cases. It’s exhausting to keep reminding you people of this, but you just never seem to learn. SMH.

“For every trial, there are scores of cases waiting in the wings—the typical federal judge has more than 500 cases on the docket. In the face of that daunting workload, the district judge must be a jack of all trades. The judge must first be an able administrator in managing the ceaseless stream of cases and issues that pass through the court. He must be adept at juggling dozens of different matters at any given time, making sure that nothing slips through the cracks. A district judge, however, must be more than a capable administrator. The judge must be an active and astute problem solver.”

Judges are far too busy dealing with enormous caseloads and complex legal arguments to cherry-pick cases in which they dislike particular litigants. Federal judges are like Socrates plus Steve Jobs with a twist of Ghandi. So let’s knock off any moaning about “judicial bias” when you lose your case. Side-eye to you on behalf of Judge Gonzalo Curiel, here, Mr. President-Elect.

“District judges are the first to encounter novel issues, and they must resolve them without the aid of guiding precedent. Because they work alone, district judges do not have the benefit of collegial decision-making or the comfort of shared consensus. And because of the press of their dockets, they face far more severe time and resource constraints than their appellate brethren.”

Or, for the common folk:

You know how you hate working while your boss is looking over your shoulder? Well, imagine how much it’s gotta suck to work while the person looking over your shoulder is a Supreme Court Justice. Yeah, that’s what District Court judges do every damn day. They don’t get to “fulfill campaign promises,” like the mealy-mouthed electorate. Federal judges have to figure out the answers to tough questions all day long, and no matter how right they get it, people complain. Federal judges know about their haters and wear them like badges of honor. They’re like Solomon, only more badass.

“As I explained in my 2015 Year-End Report, the Judicial Conference—the policy making body of the federal courts—has revised the Federal Rules of Civil Procedure to emphasize the judge’s role in early and effective case management. Those procedural reforms encourage district judges to meet promptly with the lawyers after the complaint is filed, confer about the needs of the case, develop a case management plan, and expedite resolution of pretrial discovery disputes. The reforms are beginning to have a positive effect because already extremely busy judges are willing to undertake more active engagement in managing their dockets, which will pay dividends down the road. A lumberjack saves time when he takes the time to sharpen his ax.”

While you people are flapping your gums about whether we should repeal the Affordable Care Act, we are answering questions that are like, much more complicated. We’re busy, and most of what we do is on the DL; we’d keep you most informed on how we do things, but that’d take more than 140 characters and you probably wouldn’t read it anyway. Sorry not sorry. And hey, that ax comment was cool, amirite?

“Congress directs that district judges, in order of seniority, may take their turn to serve as the chief judge of their district court. A chief judge voluntarily takes on the additional responsibility of superintending the administration of the court and its professional staff. Those administrative responsibilities include all aspects of running a courthouse, including personnel issues, budget matters, and introduction of new technologies. Few individuals who became judges did so because they were anxious to have such duties. The judges who take on the title of “chief” nonetheless perform those time-intensive chores without any additional rewards and very little thanks. Their service is essential to judicial self-governance.”

You know how Trump has been patting himself on the back for his magnanimous decision to forego his presidential salary? Well buckle up, buttercup, because I’ve got a story to tell you about what “public service” really means. Try running an entire courthouse when you can’t even get off the bench for long enough to check your Facebook status.

“Just four days after Congress created the Nation’s first thirteen district judgeships, President Washington wrote to Edmund Randolph that he “considered the first arrangement of the judicial department as essential to the happiness of our country and to the stability of its political system.” Washington stated that he was anxious to select “the fittest characters to expound the laws, and dispense justice.” Over the more than two centuries since that time, the Nation’s need for its best has not diminished.”

Shit’s about to get crazy. We’re going to do our best to keep things in check for the next four years. You’re welcome.