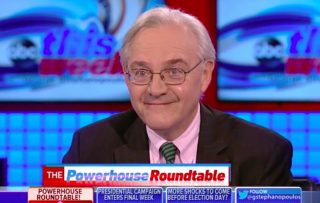 E.J. Dionne isn’t a lawyer, but he likes to play one at the Washington Post (see tweet below). Hillary’s lead campaign team — after losing the “un-loseable election” — also now declare themselves experts of the law in places like Twitter. They know better than both FBI Director Comey and the federal courts what defines probable cause and whether the affidavit (the need for which triggered Comey’s late October letter to Congress) met that legal standard for looking at the laptop seized in the Weiner investigation concerning Weiner allegedly sexting underage girls in other states. Some in the legal community — notably, many without high profile or known extensive 4th Amendment experience — are even opining on it. Did Comey’s agents have probable cause to look at the emails found on the laptop between Hillary and Huma Abedin?

The FBI had nothing to justify its election-changing intervention against #Clinton. Zero. Zilch. It was all politicshttps://t.co/9xzY2GNbYt

Well, first, let’s break down what happened. Pursuant to a legal warrant, law enforcement agents seized a laptop computer belonging to Weiner in their investigation of him allegedly sexting an underage girl in North Carolina. In searching the laptop, the agents came across emails appearing to relate to the Hillary investigation, which was outside their initial scope of inquiry. The emails at issue were found on that already seized laptop. The emails appeared to be of the same kind of confidential, classified emails from the prior investigation into Hillary’s emails. Many agents would have just searched the emails anyway, using the first warrant as grounds. But, playing by the book, the agents requested a second warrant to search those specific emails, recognizing that is the safer path. The grounds were simple. Confidential, classified emails were located outside the classified servers. This triggered the first investigation. The only cited reason the first investigation did not trigger an indictment recommendation was lack of evidence of intent. The new laptop — also completely unsecured and known to be accessible to people without a right to that access (Weiner) — appeared to have such confidential, classified emails accessible on it.

So what is “probable cause”? All that is needed for probable cause is sufficient circumstances that an officer believe a crime has been committed. What would that be here? Evidence that classified emails were on the laptop. Why did the officers believe that? Because they saw emails of the same kind as had just been investigated between Hillary and Huma on the laptop. To be precise: the email information disclosed “correspondence between one or both of these accounts and State Department email accounts.” Federal law criminalizes anyone having “unauthorized possession of, or access to, or control over” a wide range of classified and national security information, which Weiner clearly appeared to have on his laptop. That is why a near-twenty year federal magistrate Judge in the defendant-friendly Southern District of New York approved the warrant so fast.  Guess whose administration first supported his appointment to be Magistrate Judge? Bill Clinton.

As a lawyer who actually does 4th Amendment work everyday, the affidavit provided by Comey’s agents would be found to have probable cause by every Judge in the country. E.J. Dionne, and friends, can stay at Holiday Inn Express, but that doesn’t make them lawyers.

Robert Barnes is a California -based attorney. He is also a contributor to LawNewz.com.