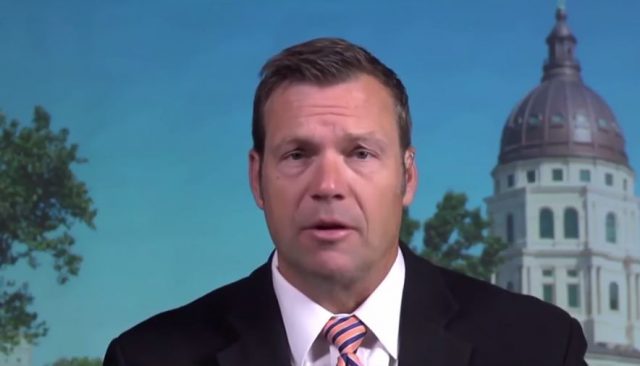 Kansas Secretary of State and Vice Chair of the Trump administration’s voter fraud commission Kris Kobach wrote a piece for Breitbart yesterday, beginning by complaining how “the mainstream media has ignored the problem of voter fraud and belittled those of us who are trying to do something about it.” He then used roughly 700 words to show exactly why people like him deserve every bit of the belittlement they get.

It’s not just that he continued to insist, as President Donald Trump has done, that voter fraud is rampant in this country, specifically in states that Trump lost. It’s not just that this whole commission is at best an exercise futility, because the election is essentially being contested by the person who won, and at worst an effort find excuses to place restrictions on portions of the electorate that tend to skew blue. It’s how sure Kobach is of himself based on “proof” that doesn’t prove a damn thing.

Kobach writes, “facts have come to light that indicate that a pivotal, close election was likely changed through voter fraud on November 8, 2016.” So excited by this new information, he devotes a separate paragraph to say affirmatively:

Whoa. What is this earth-shattering, Clinton-demolishing evidence that has Kobach so worked up? Well … get ready for this … there are people in New Hampshire whose driver’s licenses are from other states.

Don’t you see how that means that Trump really won the state and how voter fraud is a really big problem that we need to keep talking about? No? Me neither.

Kobach cites an article from the Washington Times (not, you know, his own commissions findings), which says that 6,40 people in New Hampshire registered to vote on election day (New Hampshire allows this) using out-of-state driver’s licenses. Kobach acknowledges that people who just moved to the state may not have gotten new licenses yet, but he says that new residents have 60 days to do that, and records show that as of August 30, 2017, 5,313 of those people still hadn’t gotten New Hampshire licenses or registered cars in New Hampshire.

Obviously, Kobach concludes, all of those people voted illegally. He fails to acknowledge the existence of 1) people who moved to New Hampshire unaware that they have to get new licenses within 60 days, 2) people who just didn’t care to do it, even if it’s against the law, 3) people who don’t have cars, and 4) college students.

There are more than a dozen colleges and universities in New Hampshire, which surely have out-of-state students who register to vote on campus, even if they kept their licenses from their home states. In fact, The Washington Post even spoke to three voters who confirmed that this is exactly what they did.

Of course, if you’re Kobach and you’re pushing an agenda, it’s a lot easier to push numbers that don’t mean a damn thing if they help you more than the actual facts. Clinton edged out Trump by less than 3,000 votes in New Hampshire, so if you can toss the number 5,313 out there, you can pretend that you have a case. Except there’s no evidence that any of those 5,313 people did anything wrong, and we don’t even know if they voted for Clinton, Trump, or someone else.

Kobach laments that no one takes voter fraud seriously, and that the claims that he and his efforts are absurd and laughable are baseless.