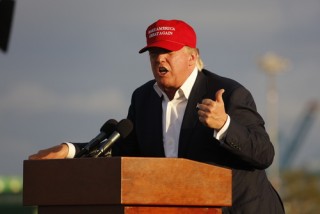 Donald Trump has now publicly declared that in some districts, a Clinton win would be per se evidence of voter fraud. I’ve got to hand it to him – sometimes, he really is pretty clever. I remember when the hanging chads seemed like the most absurd voting booth issue. But what Trump is doing is truly unprecedented. He is prophylactically making an argument for voter fraud – so that when he loses in some districts, he has an immediate go-to explanation that disclaims the notion that he simply didn’t win. The idea is as brilliant as it is offensive. Trump is determined not to go the way of Dukakis, Mondale, and Romney, who largely faded into the recesses of mainstream American consciousness following their presidential losses. With his supporters united in outrage over a “fraudulently lost election,” Trump can keep them under his spell well after November. There is still money to be made, still power to be wielded, and still crowds to be rallied — and Trump isn’t likely to walk away without a little more time in the spotlight.

And until he’s stopped, it seems like Trump is at least planning to do more than merely complain about this alleged voter fraud – he’s actively going to stop it. In a move that is eerily similar to the formation of the 1920s Nazi Sturmabteilung (a group formed to “protect” the Nazi Party from disruptors), Trump appears to enlist the help of concerned citizens on his behalf. “The only way we can lose in my opinion — I really mean this — in Pennsylvania, is if cheating goes on,” Trump said. “We have to call up law enforcement. And we have to have the sheriffs and the police chiefs and everybody watching.”

First,  voter fraud is hardly even a thing. I’m sure there are plenty of conspiracy theorists out there who will disagree, but I’m going with that tantalizing combo of common sense and hard evidence on this one. Every study I’ve seen on the matter has concluded that voter fraud is extraordinarily uncommon. Americans like to argue about politics, to post on social media about their candidates, and to watch televised debates. But when it comes to actually showing up at the polls, Americans are woefully immobile. The truth is, Pokemon GO got way more people off their couches than p0litics ever could; election booths aren’t exactly hotbeds of political corruption.

But even if voter fraud were a critical issue, Trump’s solution appears to fight voter fraud with voter intimidation. And that is patently illegal. Here’s the federal statute that says so:

“Whoever intimidates, threatens, coerces, or attempts to intimidate, threaten, or coerce, any other person for the purpose of interfering with the right of such other person to vote or to vote as he may choose, or of causing such other person to vote for, or not to vote for, any candidate for the office of President, Vice President, Presidential elector, Member of the Senate, Member of the House of Representatives, Delegate from the District of Columbia, or Resident Commissioner, at any election held solely or in part for the purpose of electing such candidate, shall be fined under this title or imprisoned not more than one year, or both.”

Throughout American history, there actually has been a very real problem with voter suppression and voter intimidation. From outright violence in the Jim Crow South to the more recent controversies over voter identification laws or the purging of felons from registered voter lists, the strategic disenfranchisement of racial and ethnic minorities shows no sign of dissipating as a national source of shame.  A self-selected Trump-supporting militia of election police would be treading on dangerous ground. As election law expert Rick Hasen recently told the Washington Post:

“One of the things that this can do is get rogue people riled up. Trump sets the fuse and lets someone else do the explosion… It strikes me as a very dangerous thing to be suggesting, because it does lend itself to the possibility of violence at the polls.”

There is, of course, the possibility that Trump will disclaim his plan for any action at all.   After all, his website sign-up could merely be the political equivalent of those “comment Amen” Facebook memes that are just phishing ploys to create email lists. We’ll have to wait and see on that one.

The less dramatic, but equally important legal problem with Trump’s apparent attempts to create his own squad of voting police comes from a case that began in 1981. During the Kean v. Florio gubernatorial election in New Jersey, the RNC created a “national ballot security task force.”   That task force undertook mailing campaigns that were targeted at black and Latino neighborhoods in New Jersey. The names of recipients to whom mailers were returned undelivered were put on a list; later, if any of those voters showed up to cast a ballot, party activists challenged their right to vote. The RNC was also alleged to have hired off-duty police officers to patrol minority neighborhoods on Election Day. The DNC sued the RNC in federal court, alleging its activities violated the Voting Rights Act and the Fourteenth Amendment, because those activities had been intended to suppress voting among minorities. Rather than taking the lawsuit to trial, the RNC agreed to a consent decree promising to “refrain from undertaking any ballot security activities … directed toward [election] districts that have a substantial proportion of racial or ethnic minority populations.” Under that consent decree, the RNC promised that it would not engage or assist in “voter fraud prevention” without getting advance approval from the court. The consent decree does not forbid “normal poll watching” by either side; both political parties regularly engage in exit polling and other information-gathering at voting sites. These practices focus primarily on campaigning, and not on combatting voter fraud.

Despite repeated attempts by the RNC to have the consent decree lifted, courts have consistently ruled to keep it in effect. In 2009, the Federal District Court for the District of New Jersey ruled again that the decree must stay in effect. That ruling was later affirmed by the Third Circuit in 2012 a decision for which The U.S. Supreme Court denied certiorari in 2013. The consent decree will expire in 2017. If Trump’s activities were to be challenged within the context of the consent order, there are certainly some preliminary issues that would need to be decided; for the decree to bind Trump, he would need to be considered “an agent” of the RNC – a likely, but not foregone conclusion. A court would also need to find that the Trump campaigned actively engaged in prohibited voter fraud prevention, as opposed to lawful poll-watching.

As the election draws nearer, the Trump Campaign’s plans will likely become clearer. Until then, we’ll be left to hope that our would-be president is only trying to trick people into donating to his campaign.