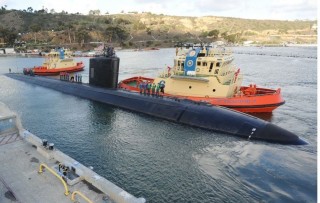 Petty Officer First Class Kristian Saucier, a Navy sailor who was convicted of unauthorized retention of defense information, is scheduled to be sentenced on Friday, and he’s citing some high-profile precedent for why Judge Stefan Underhill should go easy on him. According to a court filing obtained by Politico, Saucier, 29, pleaded guilty in May, admitting to taking six photographs of classified areas of a nuclear attack submarine, the U.S.S. Alexandria, in 2009. Saucier admitted that he knew the areas that he photographed were classified, but that he took the pictures “to one day show his family and his future children what he did while he was in the Navy.” The filing says that Saucier never showed the photographs to any unauthorized parties.

According to Politico, Saucier is currently facing 63 to 78 months in prison, but his attorney, Derrick Hogan, cited cases where the court has issued sentences that were lower than what the defendant originally faced. Saucier claimed that Hillary Clinton‘s treatment for her private email server and transmission of classified material should be an example for why Saucier should not serve a prison term.

Hogan wrote that Clinton “engag[ed[ in acts similar to Mr. Saucier,” yet the FBI recommended that she not be prosecuted. He compared Clinton’s “110 emails and 52 email chains” that were classified to Saucier’s six photos that were “classified as ‘confidential/restricted.'” Hogan argued that Saucier should not “receive any sentence other than probation for a crime those more powerful than him will likely avoid.”

In the court filing, Hogan further argued that a lighter sentence is appropriate because Saucier is a first-time offender who was only 22 at the time with an “exemplary background.” He also mentioned that two other Naval officers were caught taking pictures in the same area, and both of them received Naval Non-Judicial Punishments instead of federal prosecution.

[Image of USS Alexandria via US Navy]