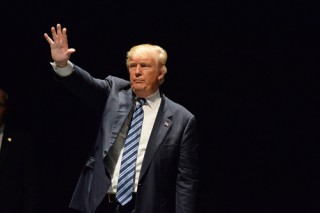 Ever since Donald Trump‘s continuing series of unfortunate gaffes this week, there has been a narrative flying around the Internet and on cable television that it’s still “legally” possible for Republicans to dump Trump. Unfortunately for those that believe the New York businessman is unfit to serve, the reality of that happening is like really, really remote. Like pretty much impossible. The bottom line is that Donald Trump would have to decide to drop out himself, or die, in order for any of these scenarios to even be possible. But that hasn’t stopped a bevy of journalists from writing such headlines as: “The RNC Can Legally Dump Donald Trump but It Has to Act Fast.”

Jay Michelson writes for The Daily Beast: “In sum, right up until Nov. 7, the Republican Party could dump Trump by declaring him unfit for office, reconvening, and nominating someone else. But it would get messier depending on how long they wait.” Except that’s not actually how it works:

Okay, so here’s what everyone is specifically referring to: Rule 9 of the Rules of Republican Party. Pay attention to the bold (emphasis ours):

The article in The Daily Beast and others have said that because the word “otherwise” is in the RNC rules, that gives Republicans wiggle room to push Trump out. Except all these commentators are forgetting about an important thing. Notice that heading on the rule is “FILLING VACANCIES IN NOMINATIONS.” As RNC rules expert Josh Putnam points out, the rule is clearly not about CREATING VACANCIES IN NOMINATIONS. Therefore, the rule only guides Republicans in what to do if there is one.

Those who have skipped over the title of the rule and jumped right to “death, declination, or otherwise” have missed the point of the rule. In doing that, most have put entirely too much emphasis on that “otherwise” condition for causing a vacancy.

But again, the intent of the rule is to fill any vacancies in the event that a nominee dies, declines the nomination or falls somewhere in between (neither dead nor able to decline the nomination). That is the intent of “otherwise”. It fills in that gap between those two bookends.

If Republicans were convinced that the “otherwise” gave them authority to replace Trump, they would certainly face a legal challenge. And of course, there is still the matter of getting a new candidate on state ballots. Many state ballot deadlines have already passed, or will soon. So there you have it folks. Unless Trump decides to drop out, Republicans are stuck with him as a nominee.