Thank you, #RBG Justice Ginsburg for Speaking Out Against Donald Trump! 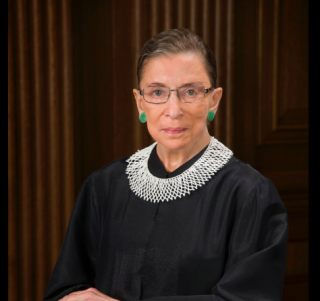 I’m bracing myself for the inevitable torrent of criticism that is going to rain down on Ruth Bader Ginsburg for getting vocal on the state of American politics instead of knowing her supposed place. Over the weekend, the Notorious RBG sat down with Adam Liptak and gave him an earful about how the Senate needs to do its job confirming Merrick Garland, and how she’d be supplying handbaskets if this country elects Trump in November.

I’m all for impartial judges, especially at the highest level. But to those who will say that RGB has acted improperly, I say please. Just stop.

Don’t get me wrong. I don’t want to see justices campaigning for candidates – not even for ones I like. I’d be horrified if I saw Hillary Clinton touting a Sotomayor endorsement, or if Elena Kagan publicly encouraged Elizabeth Warren to join the race.   But I think we can all agree that such actions are different from speaking one’s mind about the negative impact of a Trump presidency.

Trump isn’t a politician. Trump is an issue, a movement, a phenomenon. This man has invaded our electorate in ways that has the average American Googling “the difference between Hitler and Trump” and debating authoritarianism right along with the winner of America’s Got Talent.   Trump himself has bragged about his ability to transcend politics and to affect America on a wider, even non-partisan scale. And I think he’s right. He has proven that his potency exceeds that of a mere candidate. Trump is not a person – it is an idea. That idea is as powerful as any other major movement in American history, from the Civil Rights Movement to the Women’s Movement to Stonewall; the fact that Trump as a movement is detestable and dangerous only underscores its global importance.   Ginsburg’s statement that a Trump win is “unthinkable” seems pretty mild in comparison to what she surely could have said.

As I’d imagine Ginsburg felt when she spoke with the Associated Press and the New York Times, it is not just proper for influential Americans to speak out on Trump – it’s their responsibility.   Trump’s masterful manipulation of the racist, the angry, the ignorant, and the phobic began a terrifying trend that somehow appealed to many of those who had been reasonable, informed, and moderate. We all need to be talking about this. Hiding under a cloak of apolitical silence is not and should not be an option for the greatest legal minds of our time.

RBG’s suggestions in her AP and NYT interviews that a Trump presidency would create an unimaginable reality that would hurt SCOTUS for years hardly stretches the bounds of judicial impartiality. President Taft became the Chief Justice himself after leaving the executive branch, and we have endured. John Marshall himself was an active Federalist, an elected official, an international diplomat, and the Secretary of State before becoming Chief Justice (appointed, for the record, by an outgoing president Adams, one month before the expiration of his term). If Marshall’s profound legacy has withstood his robust personal involvement in politics, I’m pretty sure I’m cool with RBG talking to the a couple of reporters.

Justice Ginsburg’s no-nonsense brand of analysis has been a key facet of the modern Supreme Court. In fact, her public comments, whether about recent SCOTUS decisions, the confirmation of Merrick Garland, or the presidential election, may have political effects, but lack partisanship of any kind. Ginsburg didn’t say a Trump presidency is “unthinkable” because she is a democrat or because she supports Hillary Clinton; she said so because she is an active participant in a government that is at risk in every possible way. She didn’t say it was the Senate’s job to vote on Judge Garland’s nomination to influence voters. She said it because as a justice, she’s an expert on Constitutional mandates of Congressional responsibility.

Ginsburg’s 1993 SCOTUS nomination was confirmed 96 to 3. She’s appointed for life. And she’s 83 years old. She doesn’t need to please anyone. Remarking about the obvious disaster that is Donald Trump is not controversial and not improper. Efforts to silence those, like Ginsburg, who voice their opinions smack of the same dictatorial arrogance as does a presidential nominee who threatens the media and publicly misrepresents indisputable facts. Scrutiny of our public officials is critical. But regarding Ruth Ginsburg’s interview, they are misplaced. We should not be questioning her right to speak; we should be asking why others are remaining silent.