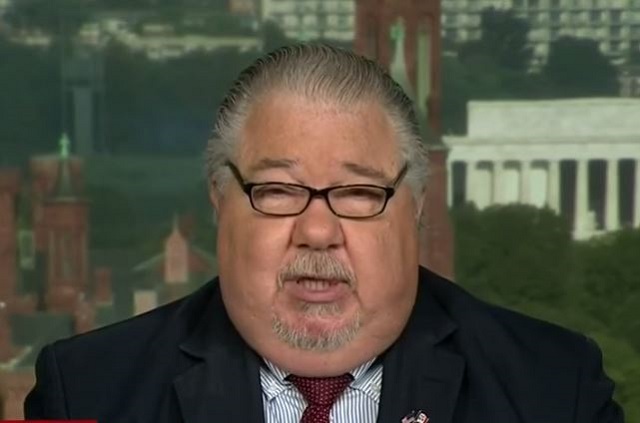 He’s at it again, folks. It’s been a while since  President Trump put someone unqualified in a top administrative position, but we had to know he wasn’t done. Our now-retinally-challenged president has named Sam Clovis for top scientist at the U.S. Department of Agriculture. For scale, Clovis is way less qualified to be a professional scientist than Betsy DeVos is qualified to head the Department of Education. And that’s seriously saying something.

As per Trump’s usual casting choices, his pick for chief scientist is not a scientist at all. He’s a right-wing talk-show host, a failed Senatorial candidate, and a climate denier. He’s got degrees in politics and business, but nothing in science. His big draw? He’s a TV Trumpster.

Clovis as a nominee isn’t just a bad idea, by the way. It’s also likely illegal. Under the law passed in 2008, the USDA’s chief scientist (the under secretary for research, education and economics) must be appointed from among “distinguished scientists with specialized or significant experience in agricultural research, education and economics.”  The Senate would also have to approve Clovis for the post, which means that Trump’s brazenness literally has no limits. If he expects the Senate to consider Clovis to be a “distinguished scientist,” then things are worse than even I thought. But as yesterday’s balcony-photo reminded us, our president is hardly short on hubris.

And wait. There’s more. Sam Clovis isn’t just lacking in scientific credentials. He’s also super anti-gay! Yep. This is a guy who has repeatedly called homosexuality an “aberration” and warns that tolerance of same-sex marriage may lead to state-sanctioned pedophilia and government protection of fetish groups. A dazzling scientific intellect, indeed.

While Donald Trump and anyone who supports him deserves the full blame for allowing someone like Clovis to rise to the top of our executive branch, it’s also liberal LGBT allies who have helped create Clovis’ bigoted rhetoric. Here’s what I mean: when tolerant folk discuss same-sex marriage or LGBT discrimination, the “love is love” message often prominently emerges. And that feels all warm and nice. But ultimately, it’s a flimsy, non-legal, unpersuasive reason to respect and validate sexual orientation.

In a video, Sam Clovis seized on the lack of clarity about the concept of extending legal protections based on sexual orientation:

“LGBT behavior is a choice they make. So we’re being asked to provide Constitutional protections for behavior, a choice in behavior as opposed to a primary characteristic.”

This is the real problem in having someone like Sam Clovis anywhere near our executive branch. It turns out that his ignorance isn’t his worst downfall– his knowledge is. Clovis, you see, got the law just right enough to be seriously dangerous. Under Constitutional law, the greatest legal protection is given to groups defined by race, religion, and national origin; slightly less, but still significant protection is given to groups defined by gender. With the exception of religion, which always gets special treatment, protected groups share characteristics which are immutable – that is, in-born and unchangeable.  In other words, characteristics like one’s sexual orientation. Clovis’ attempt to frame sexual orientation as a behavioral choice is one that has dangerous consequences; he is, of course, correct that the Constitution does not extend equal protection to groups based on behavioral choices. Essentially, our laws protect who you are, not what you do. While “love” is always worth protecting and celebrating, it’s a lousy legal argument for treating LGBT people equally, and bigots like Clovis know it.

What Clovis doesn’t know, though, is how the law works when it’s combined with good science. Clovis sanctimoniously intoned:

If LGBT adherents were genetically predisposed, then one must ask why a segment of the population that constitutes numbers less than one third of those who might be left-handed or one fourth the number who might be blue-eyed or one eighth the number who might be genetically predisposed to obesity should receive 14th Amendment protections when others are not even considered. Certainly left-handers have more to bark about than most. Thus, the argument must be about something other than genetic predisposition.

Here’s the thing – if left-handers or blue-eyed people were the victims of systematic discrimination, they would absolutely be deemed a legally-protected class of people. The only reason why they don’t get those protections now is because they don’t need them. Show me a bunch of bakers who won’t bake cakes for lefties, and I’ll show you a solid equal protection claim.

Bottom line: Sam Clovis is a disaster. If our Senate approves him, it will be abdicating its responsibility to use good sense and to follow the law. We should keep our eye on that. Meanwhile, while we’re sitting around lamenting Chief Scientist Sam Clovis as the latest installment in Trumpmerica, we should spend a little time adding the word “immutable” to those “love is love” T-shirts.