McConnell Has a Lot of Nerve Scolding Democrats for Plan to Block Gorsuch, Even if He’s Right 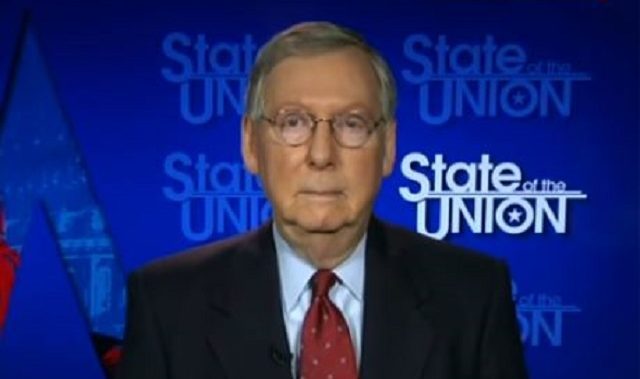 The current political climate can be baffling and disorienting. With a President who tweets against negative polls and a White House press secretary who treats the press like an adversary (and vice versa), it can be hard to maintain a firm grasp on reality. Perhaps that’s what happened to Senate Majority Leader Mitch McConnell when he penned an op-ed for Politico in which he railed against Democrats for plotting to block Supreme Court nominee Judge Neil Gorsuch. Maybe all the commotion that’s gone on around him has caused his head to spin around so much that he doesn’t realize how hypocritical he sounds, given that Republicans just did the same thing to President Obama’s pick, Merrick Garland. And maybe I’m suffering from the same ailment, because as much as I detest McConnell for speaking against this, I also sort of agree with him.

As McConnell points out, Democrats never had a problem with Gorsuch in the past. When he was appointed to the Tenth Circuit in 2006, not a single Senator from either party voted against him. Yet now, Senate Minority Leader Chuck Schumer and his fellow Democrats suddenly have a big problem with him. McConnell claims that Democrats don’t actually have an issue with Gorsuch himself. “It’s about President Donald Trump,” he writes. Of course, he’s dead wrong on this. Democrats aren’t fighting back because of Trump, they’re reacting to Republicans like McConnell who refused to even hold an up or down vote on Garland’s nomination last year.

McConnell claims what his party did is different. He dismisses the GOP’s handling of the Garland nomination as  an expression of the belief that “the next president — Democrat or Republican — should select the next nominee for the Supreme Court,” when President Obama made the pick during his last year in office. He claims that he was consistent with this belief, even when Hillary Clinton appeared to be the favorite to win the presidency. But it’s easy to say this now. There was great speculation at the time that, had Clinton won in November, Republicans would have immediately confirmed the relatively moderate Garland instead of risking a far-left nomination from Clinton. Since Clinton didn’t win, McConnell can claim all he wants that Republicans would have played nice if she was the one selecting the next justice.

Still, McConnell has the nerve to further distinguish the current situation from what happened with Garland. While Democrats are expected to force the Senate to confirm Garland by a 60-vote supermajority, he claims the Republicans never threatened to do that with Garland. Of course Republicans didn’t do this, because they didn’t have to! By controlling the Senate Judiciary Committee, they were able to ensure that Garland’s nomination never made it to a vote at all. Republicans didn’t have to make threats or force challenges to anything, because all they had to do was ignore the situation and wait for it to go away. Democrats don’t have a majority, so they don’t have that option. They’re pushing for a 60-vote requirement because that’s all they can do.

Of course, that doesn’t make it right, and it’s why, despite my utter contempt for McConnell, I can’t argue with his main point: Democrats aren’t acting out because they don’t like Gorsuch, they’re acting purely out of political spite. Sure, if McConnell and his GOP cohorts hadn’t pulled what they did with Garland, maybe we wouldn’t be here now. But that’s not an excuse. Blocking a perfectly good Supreme Court nomination due to partisan battles is wrong. It was wrong when the Republicans did it, and it’s wrong now. If Democrats can’t see that, they’re proving that they’re no better than their opponents. In fact, they’re worse.

See, at least McConnell and Senate Judiciary Chairman Chuck Grassley, the ones who led the anti-Garland charge, were consistent. Both of them voted against Garland when he was confirmed to the D.C. Court of Appeals in 1997. No Democrat voted against Gorsuch when he joined the Tenth Circuit. What Schumer and company are doing is 100 percent pure childish, partisan squabbling. And what’s their end game? Say they block Gorsuch, what’s next? Do they plan on continuing to block every pick until a Democrat is in the White House again? When Republicans played this game, it was a one-year gamble. Obama was leaving, and they were prepared to hold off on Garland to see if they’d get someone they prefer. It was disgusting and damaging to the country, but it worked. Democrats have no plan. They’re not holding out for someone better. They’re throwing a tantrum and yelling, “They started it!”

Did Republicans steal the Supreme Court seat by blocking Garland? Yes. Should Democrats be upset? Definitely. Should they treat Gorsuch the same way the GOP treated Garland? Absolutely not. We have eight justices on the Supreme Court right now, which has already resulted in split decisions. We need to fill the vacant seat on the Court ASAP, and now is not the time to engage in political games. Gorsuch is extremely qualified, and I have yet to see any real criticism of him. Even those with differing legal philosophies agree that he’s brilliant and fair.

Perhaps the most ironic part of it all, of course, is that Gorsuch is exactly who Democrats should want on the bench! Like the late Antonin Scalia, Gorsuch is an originalist when it comes to interpreting the Constitution. Sure, originalism clashes with liberal philosophies that extend the Constitution to give people more rights, such as abortion, so I understand why people may not like justices who want to stick to a strict interpretation. However, if President Trump tries to extend his executive power beyond what’s given in the text of the Constitution, Gorsuch is exactly who Democrats should want on the front lines to take him on. If you’re worried about a President trying to change the nature of the country, isn’t it good to have people on the Supreme Court who defend what the nation was intended to be?

It’s time to stop the madness and act in the best interest of the country, not a party. Save the partisan agenda pushing for actual legislation. Democrats need to do their job so that the Supreme Court can better do theirs. Still, Mitch McConnell is the last person who should be saying this.