John Oliver Owes It All to Hustler v. Falwell 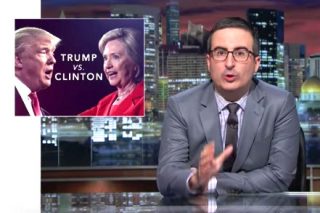 In this insane American political season, we should all raise a glass to Larry Flynt, the publisher of Hustler Magazine who won his 1988 Supreme Court decision, Hustler Magazine vs. Falwell, which protects our vibrant political comedy scene.

Political comedians around the world are wishing they had a Hustler v. Falwell decision to protect them.  Irish satirist Oliver Callan said recently that Ireland’s defamation laws are killing off satire and he was shaken when billionaire media owner Denis O’Brien pulled a Trump libel bully move and threatened to sue over Callan’s supposed “premeditated and malicious” verbal attack on O’Brien on Callan’s radio show.

“Part of the reason I don’t have a television show,” Callan recently told The Sunday Times of London, is because “[s]atire and parody are not legal defenses” in Ireland.

Our American comedians are protected because conservative Christian leader Rev. Jerry Falwell sued Hustler for publishing a raunchy parody liquor advertisement in 1983 portraying the pastor as he described his “first time” drinking Campari, which was a double entendre for his “first time” when he lost his virginity to his mother in an outhouse.

“Mom looked better than a Baptist whore with a $100 donation,” the mock ad quotes Falwell as saying.  “I always get sloshed before I go out to the pulpit,” the fake Falwell says, “You don’t think I could lay down all that bullshit sober, do you?”

Flynt heartily agreed that he wanted the ad to cause Falwell severe reputational and emotional harm.  When asked during his raucous deposition (is there any other kind?) if the ad was meant to “attack[] a man in his profession, Flynt answered “yes.” When asked if “one of your objectives” in publishing the fake ad “was to destroy [Falwell’s] integrity, or harm” Falwell’s reputation, Flynt replied with relish, “To assassinate it.”

Falwell sued for libel, invasion of privacy, and intentional infliction of emotional distress, saying the ad was “false,” harmed his reputation, and hurt his feelings.  A jury awarded Falwell $150,000 in damages after finding Hustler liable for intentional infliction of emotional distress.  But the jury found there was no libel because the ad was not reasonably understood as stating true facts. In other words, it was a joke.  Flynt appealed all the way to the Supreme Court.

Falwell’s lawyer urged the Supreme Court during oral argument to find Hustler liable because Flynt admitted he knew the fake ad was false, intended to hurt Falwell, and was highly offensive because the ad was “repulsive and loathsome” and “malicious character assassination.”

“The sort of robust political debate encouraged by the First Amendment is bound to produce speech that is critical” of government officials and public figures like Falwell, Chief Justice Rehnquist wrote in the decision. “One of the prerogatives of American citizenship is the right to criticize public men” and level “vehement, caustic, and sometimes unpleasantly sharp attacks.”

First Amendment attorneys and reporters don’t give enough credit to Flynt and his Hustler vs. Falwell win.  I think the decision is even more important than the 1964 Supreme Court decision, New York Times vs. Sullivan, which protects factual media reports about government officials.

In October of this year, Flynt received a standing ovation from a crowd of young law clerks and lawyers at a movie night sponsored by Judge Alex Kozinski of the U.S. Court of Appeals for the Ninth Circuit in the landmark court building in Pasadena.

Kozinski screened the 1996 Milos Forman Film, “The People vs. Larry Flynt,” and invited Flynt as a guest speaker to the movie night.  The 73-year-old Flynt, who uses a wheelchair since being shot in a 1978 assassination attempt, choked up as he recounted visiting a Philadelphia monument that listed his name as one of several people who have played a role in upholding the Constitution. “I’m still moved by it to this day,” he said to a round of applause.

Flynt says he and Falwell became friends after the case.

Susan E. Seager is a First Amendment attorney in Los Angeles who teaches media law at the University of Southern California.