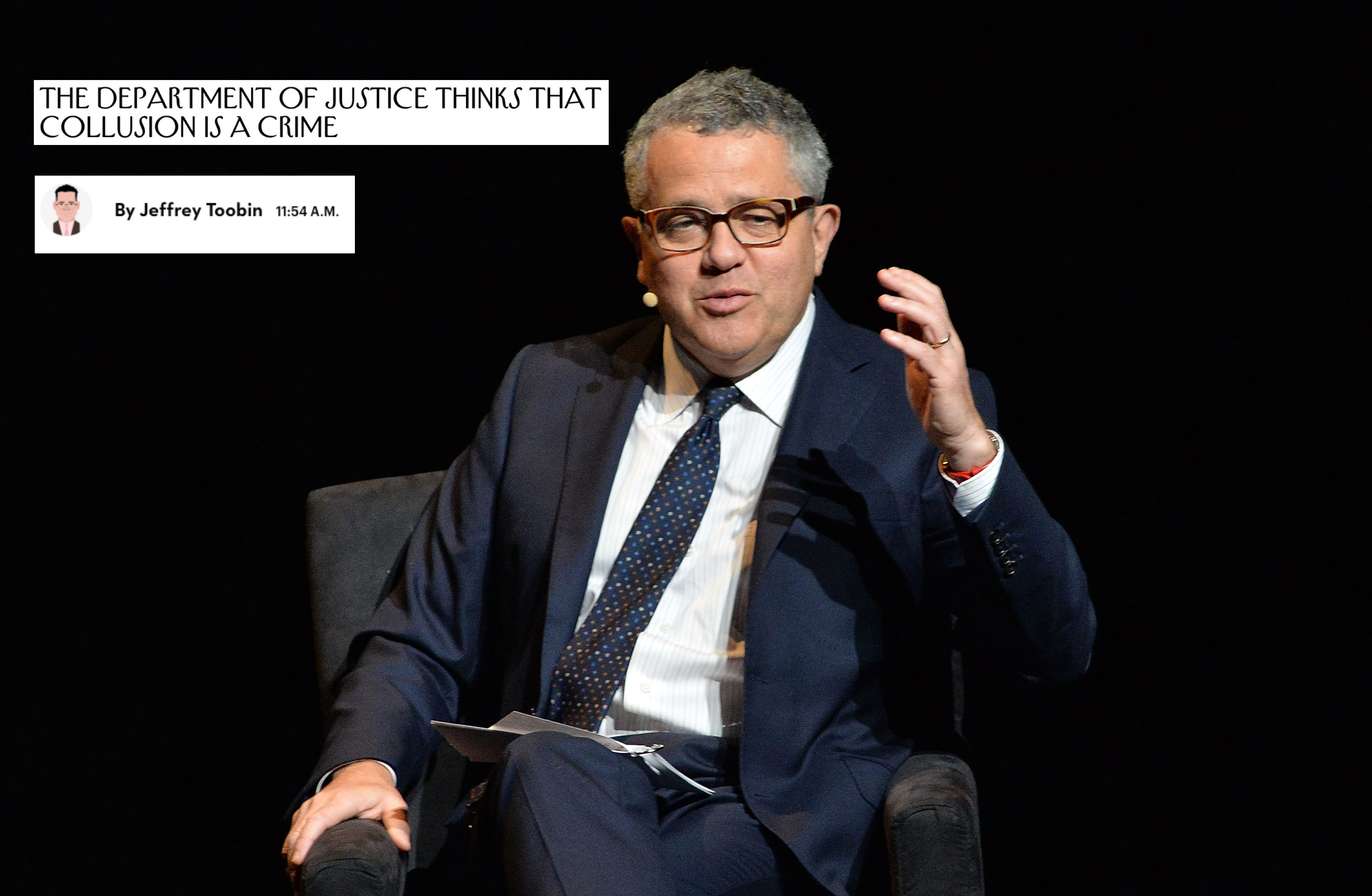 Duplicative of the piece’s entire myopic thesis, the article is headlined “The Department of Justice Thinks Collusion Is a Crime.” That’s an interesting headline because it’s exactly and entirely wrong.*

Toobin begins his analysis with a call-and-response for the ages. He writes, “Is collusion a crime? That is one of the central questions of the investigation into Russian efforts to interfere in the 2016 U.S. elections.”

By now, most legal experts and observers are well aware that U.S. law only codifies the crime of “collusion” within the context of antitrust law.

As civil liberties journalist and national security expert Marcy Wheeler noted in a March 5 tweet, “collusion” is a word repeatedly used by President Donald Trump and his allies precisely because collusion is not the crime Trump and those in his orbit have to worry about–and therefore “collusion” operates as a convenient fount of ambiguity from which misdirection springs eternal.

Committed a crime or crimes arising out of payments he received from the Ukrainian government before and during the tenure of President Viktor Yanukovych.

Then, in service of this incorrect assertion, Toobin writes:

The second point shows Mueller’s authority to bring the case that he did against Manafort, but the real news is in the first point. That statement could not be clearer that Mueller can examine whether a member of the Trump campaign and the Russians were “colluding,” and thus working together “in violation of United States law.” In other words, according to Rosenstein, collusion would be a crime.

Without being too harsh on Toobin here, that’s simply not how the English language works–or U.S. law for that matter. As a former prosecutor, Toobin should be aware of the niceties involved in drafting and interpreting legal documents.

What Rosenstein’s memo actually says is simply a restatement of the original special counsel memo with an added focus on Manafort’s documented Ukrainian ties.

In plain language, this second memo reads: The U.S. DOJ assigned Robert Mueller to investigate whether any crimes were committed by certain U.S. principals in the course of alleged collusion with Russian government officials. This is a night-and-day difference from what Toobin seems to believe.

Here, Rosenstein’s invocation of the word “colluding” is a colloquial use of language meant to describe a mutual relationship–it’s not being used as a legal term of art. Manafort’s potential crimes and/or legal violations may have occurred because of or due to the process of this mutualistic collusion, but the crimes and violations themselves would–and are presently alleged to be–actual crimes and violations. To wit: fraud, conspiracy, and various regulatory infractions.

Toobin ends by asserting, “Mueller now has the authority, and the legal theory, to bring criminal charges for collusion.”

This is also false.

Mueller has had all the authority he needs for quite some time–August 2, 2017 at the latest–but he still doesn’t have the authority to bring charges for collusion because that’s a crime that just doesn’t apply here and within the proper context, simply doesn’t exist. As in most legal systems, U.S. law doesn’t allow prosecutors to file charges on non-applicable or non-existent crimes just because they have a theory.

Once again, that’s nowhere close to what Mueller believes of what was asserted by Rosenstein in his memo, even if Toobin might have you think otherwise.

In any event, it’s just not true.

*Editor’s note: To be clear, the Department of Justice is quite aware that collusion is a crime because the agency occasionally prosecutes the crime of “collusion” as a violation of the Sherman Act–they just don’t care about antitrust laws viz. the Russia investigation.