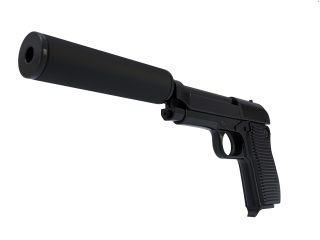 The GOP has just risen to a whole new level of crazy. Last week, it introduced the Duncan-Carter Hearing Protection Act of 2017, sponsored by Rep. Jeff Duncan (R-SC) and Rep. John Carter (R-TX). The bill removes gun silencers from the scope of the National Firearms Act of 1934, and refunds the $200 transfer tax to applicants who purchased them after October 22, 2015.

Yes, we’re talking about gun silencers, or “suppressors” as they are euphemistically known in the industry. You know – those things that assassins snap on the ends of their pistols in action movies to look all slick and cold-blooded. Apparently, the logic is that the world would be a much safer place if silencers were more readily available to the average consumer. Sure.

I get that people have very different views on the appropriate role of guns in our society. I stand fast by the opinion that since most Americans can’t be trusted to use apostrophes properly, allowing them firearms is a generally bad idea. But that’s just my instinctual reaction on the matter. Intellectually, I certainly understand that reasonable minds can disagree about the scope of the Second Amendment, gun legislation and reform, and public safety. Citizens in different parts of our country have diverse experience and differing values for hunting and other shooting sports. And a great many well-intentioned people honestly believe handguns are a necessary to any realistic plan for personal and family safety.

Let’s be clear, though. The use of silencers is not about gun rights or gun ownership. Arguing that the right to gun silencers is a second Amendment issue is like arguing that driver’s license laws entitle you to drag race down your local freeway.   Gun silencers are about one thing: revenue for the gun industry. Firearms of all kinds work with or without silencers; this multi-billion dollar business needs to find new ways to sell things to old customers – and accessories such as silencers are an integral part of the long-term business plan. Marketing teams for gun manufacturers are well aware that thousands of wannabe-James Bonds and assorted imagined tough guys will jump at the chance to outfit their personal arsenals in badass style. What’s more, they know that introducing this line of business via idiotic legislation amounts to the best publicity money doesn’t even have to buy.

The Hearing Protection Act is touted by the industry as “a healthy move for enthusiasts” – an assertion that is only slightly less comically-asinine than is the follow-up (and totally unsupported) claim that gun enthusiasts “aren’t the only ones who’ll benefit” from the use of suppressors. I’m not sure who else, exactly, would “benefit” from a gun silencer, unless, of course, they are referring to the Congressmen behind the bill.

If that doesn’t make you throw up in your mouth a little, I give you this promotional video of our soon-to-be-president’s son as celebrity spokesman for silencers:

Handguns, dangerous as they are, have one built-in safety mechanism: they’re loud. When you hear shots – whether those fired by a hunter in an open field, or those fired by a criminal in a shopping mall — you know you should get the hell out of the way. The suggestion that gun silencers will protect the public safety is an offensive attempt by the gun industry to market unnecessary and dangerous garbage to consumers, and an even more offensive attempt by legislators to help them do so.

Where are the true conservatives on this issue? Where are the tough-on-crime suffer-no-fools patriots who demand the right to protect their families and communities? Where are the Republicans who hated Hillary Clinton for being a corporate shill? An experienced and mature gun user – even a gun enthusiast – must see the Hearing Protection Act of 2017 for what it is: an unabashed marketing scheme to line the pockets of gun companies at the expense of public safety and basic common sense. Even the go-to mantra succeeding mass shootings – “a good guy with a gun would have stopped this bad guy with a gun” – crumbles in the context of a school-shooter with a silent firearm. The claim that silencers are necessary to protect the health of shooters would be laughable if it weren’t so despicably dangerous.

The people who should be most outraged by the Hearing Protection Act aren’t gun-hating liberals who knee-jerk at any mention of firearms. They are conservatives and libertarians who value their own credibility in the nationwide debate over Second Amendment rights. It is the responsibility of supporters of Heller to call bullshit on legislation that is nothing more than a marketing plan dressed up as “hearing protection.” Gun owners of integrity have an obligation to remind Congress that earplugs and earmuffs are readily available, and that claims of the necessity of silencers are as stupid as any that big tobacco should manufacture self-lighting cigarettes to prevent kids from burning themselves with lighters.

The Hearing Protection Act of 2017 does quite a bit more than simply propose a change in regulations. It announces the outright willingness of its supporting legislators to sacrifice truth as they cave to the whims of lobbyists. It proves a short-term commitment of Congressmen to deliver to deep-pocketed supporters while it erodes the credibility of anyone reasonably arguing for Second Amendment rights. More than anything else, it showcases the utter disrespect its sponsoring Congressmen have for their own constituents. These legislators obviously assumed that their name for this law could disguise it as one committed to audiology science, as opposed to a self-serving legislative gift to enormous corporations allowing them to sell dangerous equipment to idiots entertaining themselves by emulating mobsters.