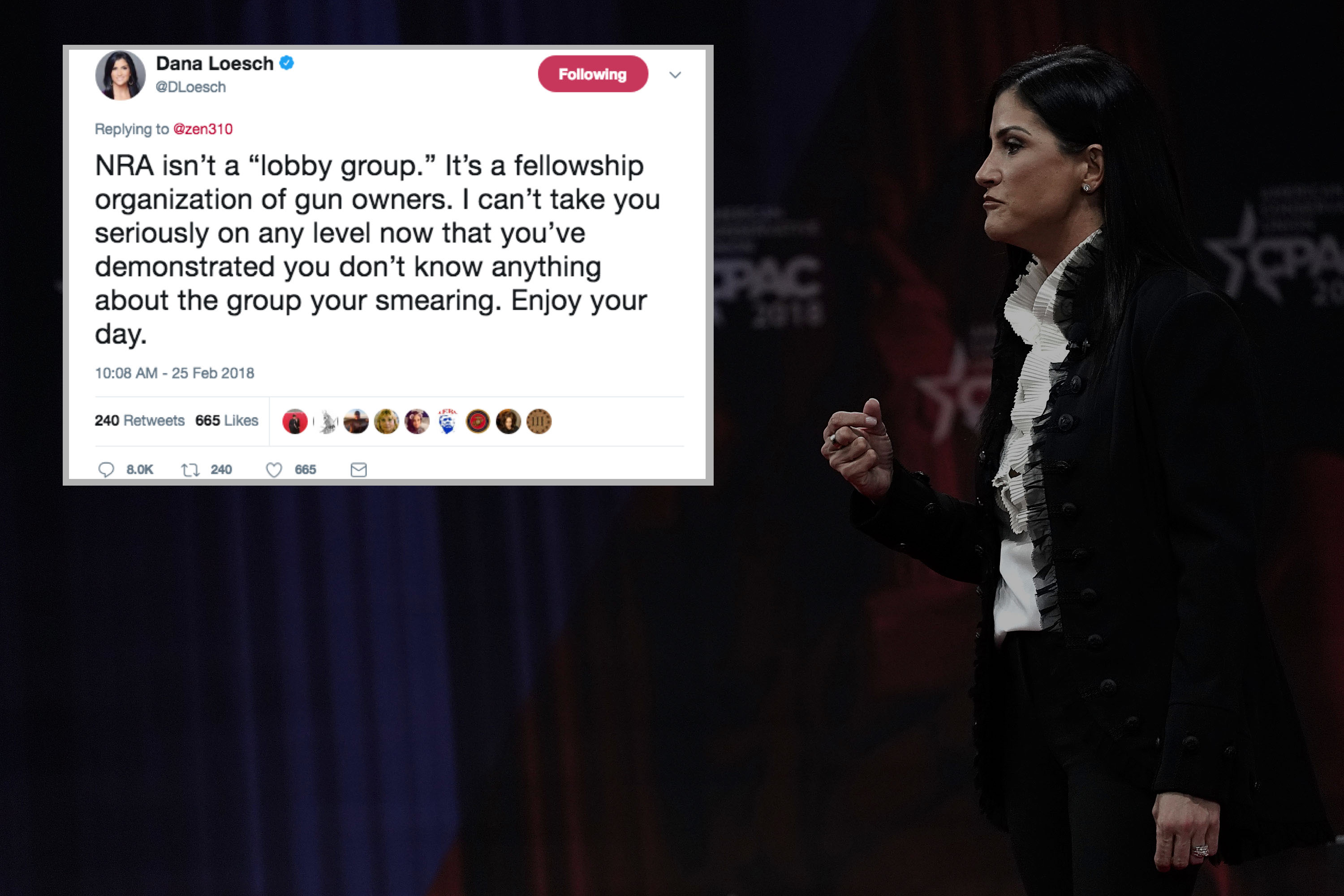 National Rifle Association (“NRA”) spokesperson Dana Loesch on Sunday claimed the NRA is not a lobbying group in response to criticism over the NRA’s long and well-known history of lobbying.

Twitter user Christine Beil called the NRA and Loesch out by noting, “the #NRA is the lobby group paying politicians, the #NRA is the one who immediately came out against age restrictions.” Beil also criticized the Second Amendment rights organization for their opposition to trigger locks, federal gun registries and their refusal “to discuss the need to control the deadliest assault weapons.” In response to Beil’s criticism, Loesch wrote:

NRA isn’t a “lobby group.” It’s a fellowship organization of gun owners. I can’t take you seriously on any level now that you’ve demonstrated you don’t know anything about the group your smearing. Enjoy your day.

OpenSecrets also notes that the NRA is the 9th largest outside spending organization in all of U.S. politics–spending upwards of $54 million on such efforts.

Many, if not most, of those declarations come in the form of the LD-2 Lobbying Report–also mandated by the 1995 LDA. A typical LD-2 lobbying report filed by the NRA is reflected by numerous such reports made by federally registered lobbyists for the NRA like Todd Adkins, Stephen Aaron and Wayne LaPierre–who currently serves as the NRA’s executive vice-president.

Loesch’s incorrect statement about the NRA’s lobbying activities may have been an attempt to distinguish between the NRA itself and their subsidiary Institute for Legislative Action. This distinction is effectively immaterial to Loesch’s point, however, because both groups–the National Rifle Association of America and the NRA-ILA–are registered as federal lobby groups. This, of course, is the exact opposite of what Loesch wrote in her brief Twitter feud.

That interaction began when ABC News posted video of Loesch criticizing Broward County Sheriff Scott Israel. In the clip, Loesch attempted to deflect criticism of the NRA by focusing on the apparent failure of Broward County Sheriff’s deputies to effectively respond to the mass shooting at Marjory Stoneman Douglas High School in Parkland, Florida.

Christine Beil initially went after Loesch and the NRA for “paying” politicians to refuse any gun control measures. Beil also claimed the NRA represents gun manufacturers as opposed to gun owners. This appears to be the comment that originally triggered Loesch’s incorrect statement as to the NRA’s broader legal status as a lobbying organization. Loesch said:

That’s NSSF, not NRA. Do you even know who you’re blaming? Right, anyone but the sheriff and people who stood down and allowed his threats to become action.

While containing a true statement about the National Shooting Sports Foundation–they are an official and admitted industry lobby–Loesch was dissembling here as well.

We’ve reached out to both the NRA and Loesch for comment.