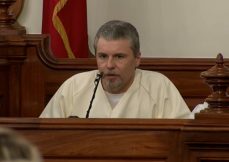 A man charged in the case of a slain Tennessee nursing student said Thursday that he helped his friend unload the injured woman’s body from a truck and served as a lookout when the friend shot her near a river.

Jason Autry testified in the trial of Zachary Adams in Savannah, Tennessee. Adams, 33, has pleaded not guilty to kidnapping, raping and killing Holly Bobo, who was 20 when she disappeared from her home in Parsons on April 13, 2011.

Her remains were found 3 ½ years later in woods not far from her home in Decatur County, about 100 miles (160 kilometers) southwest of Nashville. Adams faces the death penalty if convicted of first-degree murder.

Autry also is charged in connection with Bobo’s rape, kidnapping and slaying. He is on a list of witnesses who could get immunity in the case, and he told prosecutor Jennifer Nichols during questioning that he was testifying because he wanted leniency.

Adams’ trial began Monday. Autry’s testimony provided the most detailed description of the connection between Adams and Bobo’s killing. Bobo’s brother, Clint, has testified he saw his sister walk into woods behind their family’s home with an unidentified man wearing camouflage on the day she disappeared.

Autry said Adams provided some graphic details when he told Autry that he, his brother John Dylan Adams and Autry’s cousin Shayne Austin had raped Bobo. John Dylan Adams also is charged in the case. His trial has not been set. Austin was found dead in an apparent suicide in Florida in February 2015.

Wearing a white prison uniform with the words “maximum security” on the back of his shirt, Autry told jurors he had been locked up for theft and drug convictions three times before he was jailed in the Bobo case. He acknowledged an addiction to methamphetamine and morphine.

Autry said he’d known Zachary Adams for years. He said he called Adams on the day of Bobo’s disappearance asking Adams for a morphine pill. When Adams called him back, he told Autry that he needed his help.

Autry then drove to Austin’s trailer, where Adams had driven with Bobo wrapped in a blanket in the back of his pickup truck, Autry said. Adams was wearing camouflage, Autry said.

Autry, whose nickname is “Train,” said he bought a morphine pill and went to his car, cooked it down, mixed it with meth and injected it.

He then walked to Adams’ truck.

Adams and Autry drove Adams’ truck to the river and retrieved Bobo’s body from the truck, he said. He said they didn’t have the necessary tools to dig a grave, so they decided to throw her into the river, at a spot under a bridge.

But Bobo made a sound and moved, indicating she was still alive. Adams retrieved a pistol from his truck, Autry said.

Autry said he told Adams to wait. Autry then walked around the area to make sure no one was around, he said.

Autry told Adams the area was clear. He then heard a gunshot coming from the location where Adams and Bobo were.

Autry said he heard a boat engine. Fearing capture, he and Adams loaded Bobo’s body back into the truck and drove away, Autry said.

Autry then told Adams he had to meet his girlfriend for lunch. But there was another reason he wanted to leave, Autry said.

“I realized that this old boy had made some bad mistakes, some bad judgments,” Autry said. “I was looking for a way to put some distance between me and that situation.”

Autry later faced questions from defense attorney Jennifer Thompson about his drug use, including how he injected it the day they went to the river.
Autry acknowledged failing to remember calls he placed that morning.

“Once that euphoria kicked in, you could say my track of time was altered,” Autry said.

Later, Thompson asked if being high affects his memory.

Autry also acknowledged lying when he said after he was charged that he did not know who hurt Bobo.

Bobo’s disappearance led to a massive search in western Tennessee. The Tennessee Bureau of Investigation has said it was the most exhaustive and expensive investigation the agency ever conducted.