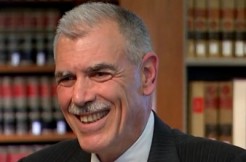 Obamacare has a strong legal standing, said U.S. Solicitor General Don Verrilli in an interview with NBC News. The attorney will soon step down from the position, and looked back at his court victories.

“I think the debate is effectively over,” Verrilli said.

“We had an alternative constitutional argument to justify the constitutionality of the law,” he said. “It’s not like we pulled a rabbit out of the hat. That was a defense of the statute right from the very beginning.”

It wasn’t the easiest decision to make. Verrilli said that before the hearings, politically minded aides worried the tax strategy would hurt them.

“The lawyers think we need to raise this tax power argument, and some of the political folks don’t want to raise it, because you’ll be subject to criticism on the ground that you’re taxing Americans,” he said. “The president didn’t have any difficulty deciding that we were going to make the tax power argument right from the beginning, and then we never looked back on it.”

Verrilli will step down from the position on June 24.
–