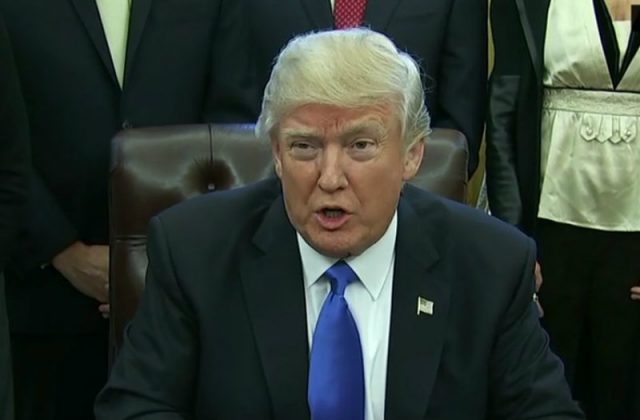 Back when then-candidate Donald Trump outlined his 100-day plan for his proposed administration, he included the promise that for every new federal regulation passed, two existing regulations must be eliminated. On Monday, President Trump’s “get one new, get rid of two” rule became the subject of his latest Executive Order. While past presidents have taken steps to rid the books of unnecessary, duplicative, or conflicting regulations, we’ve never seen anything quite like this. Like so much that’s happened in the past ten days, an order seeking to deregulate for the mere sake of deregulating is unprecedented.

The purpose of the EO was described in its text as follows:

“It is the policy of the executive branch to be prudent and financially responsible in the expenditure of funds, from both public and private sources. In addition to the management of the direct expenditure of taxpayer dollars through the budgeting process, it is essential to manage the costs associated with the governmental imposition of private expenditures required to comply with Federal regulations. Toward that end, it is important that for every one new regulation issued, at least two prior regulations be identified for elimination, and that the cost of planned regulations be prudently managed and controlled through a budgeting process.”

The order made good on President Trump’s promise, by directing as follows:

“Unless prohibited by law, whenever an executive department or agency (agency) publicly proposes for notice and comment or otherwise promulgates a new regulation, it shall identify at least two existing regulations to be repealed.”

The effect, as well as the actual intent of this EO remains to be seen. This may be the latest in a string of overzealous, overreaching and under-considered rules promulgated by the Administration of Alternative Facts. Federal regulations are rules adopted by federal regulatory agencies as the result of a lengthy legislative process. That process involves research, open discussion and hearings.  These regulations are, by their very nature, a collaborative process; by contrast, executive orders, meant to be accomplished by the flourish of a presidential pen, cannot constitutionally create new law. Executive orders merely direct an existing agency to enforce an existing law. Striking down existing regulations requires the same procedure as creating new ones – and that’s a procedure that goes beyond the bounds of executive power.

President Trump wouldn’t be the first chief executive to issue an order that exceeded the scope of his authority.  During the Korean War, the Supreme Court handled the question of an overreaching Executive Order when President Truman had issued an EO directing the Secretary of Commerce to seize and operate most American steel mills. During wartime, the Court has often taken a broad view of the scope of executive power; but in this case, SCOTUS found that Truman had gone too far.

Justice Hugo Black was pretty clear about where the president’s authority ends and where Congress’ begins:

“The Founders of this Nation entrusted the lawmaking power to the Congress alone in both good and bad times. It would do no good to recall the historical events, the fears of power and the hopes for freedom that lay behind their choice.”

The president’s power, according to Justice Black back in 1952, is to “see that the laws are faithfully executed” –- a role that, according to Black, necessarily “refutes the idea that [the president] is to be a lawmaker.”

So that’s pretty clear. The president gets to enforce laws – not to make them. When we’re talking about administrative agencies, Congress doles out some of its legislative power to the agencies themselves; but such a hand-off by no means indicates that the executive branch may dictate how the agencies may adopt rules.

The question of whether the president can direct agencies to adopt a rulemaking procedure such as “get one new, get rid of two” is one that hasn’t exactly been put to the test. But it does sound an awful lot like legislating – or at least un-legislating. As Justice Black wrote more than half a century ago:

“The Constitution is neither silent nor equivocal about who shall make laws which the President is to execute. The first section of the first article says that ‘All legislative Powers herein granted shall be vested in a Congress of the United States . . . ’”

“Most administrative law scholars would conclude that the President has no inherent authority to impose this kind of limitation on agency rule-making.  So, unless Congress were to confer new presidential authority by statute, the reappearance of the qualifying language ‘to the extent permitted by law’ is likely to operate as a major impediment.”

President Trump may be sacrificing our entire system of checks and balances for some amorphous (not to mention unwise, illogical, in most cases, totally uninformed) goal of deregulating our society. Such a decision would be myopic to the point of outright blindness. But there are also some other possibilities.

It is possible that this EO is just a grasp at a public relations maneuver – a grandiose flourish of power without any real bite. And let’s face it, even the president’s most fervent supporters concede his willingness to make empty proclamations if they play well on television.

The text of the order itself directs agencies to “identify” regulations for elimination. Really, that may simply amount to making a list of regs recommended for the chopping block. Sure, if this EO were used as a basis to do more — such as actually repealing the regulations—the analysis would differ. But simply “identifying” might be the new administration’s way of making good on a promise without actually doing anything concrete.

What the two-for-one executive order seeks to do, what it can legally do, and what it will do remain unanswered questions for now. But even if the EO itself is less powerful than promised, it does specifically indicate the administration’s plan to use the powers it does have to accomplish as much deregulation as possible.

“For fiscal year 2017, which is in progress, the heads of all agencies are directed that the total incremental cost of all new regulations, including repealed regulations, to be finalized this year shall be no greater than zero, unless otherwise required by law or consistent with advice provided in writing by the Director of the Office of Management and Budget (Director).”

The direction — to reduce the budget underlying any new regulations to a “net zero” cost when combined with repeal of any old regulations — is the administration’s way of wielding its considerable budgetary power.

“All this said, legal enforceability isn’t the only consideration. Agencies must have their proposed annual spending approved by the Office of Management and Budget (which compiles the President’s budget request to Congress) — and money is always a powerful motivator.”

Significant questions still loom with respect to this EO.  Many regulatory programs involve interagency coordination, and many others effect cost-saving measures whereby their “cost” is a malleable concept.  The only thing that’s really clear is that the Trump Administration seeks to minimize federal regulations, just as it promised it would.

Some may point to the goal of this Executive Order as being “conservative” in that it ostensibly seeks to minimize waste and ease up on government micromanagement. But a directive that laws are to be repealed just because there are “too many” of them is a position antithetical to the concept of conservatism in that it fails to safeguard or maintain anything of value. Neither is it “progressive” or even “regressive,” but rather, it is a radical break from all things legal, logical, or American.