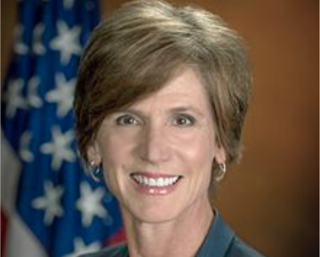 “We have comments from the president about what this is supposed to do,” Ms. Yates said in a meeting on Monday, according to The New York Times.  “The intent was clear from the face of it,” she added.

Yates based her decision in part on Trump’s statements to the Christian Broadcasting Network, where he said that Christians were being persecuted in the Middle East and should be given priority to move to the United States.

She was concerned by the statements by Trump advisor and former New York mayor Rudy Giuliani to Fox News host Jeanine Pirro on Saturday.  Pirro asked Giuliani whether Trump’s travel ban had anything to do with religion.

“How did the president decide the seven countries?” Pirro asked Giuliani. “Okay, talk to me.”

“I’ll tell you the whole history of it,” Giuliani said. “So when [Trump] first announced it, he said, ‘Muslim ban.’ He called me up. He said, ‘Put a commission together. Show me the right way to do it legally.’ ”

Based on the public statements by Trump and Giuliani, Yates reportedly concluded that “Trump’s executive order appeared to be designed to make distinctions among different classes of people based on their religion.”

Several lawsuits challenging the executive order allege that the executive order violates equal protection under the Fourteenth and Fifth amendments, religious freedom and non-discrimination under the First Amendment, and the Immigration and Nationality Act of 1965, which banned all discrimination against immigrants on the basis of national origin, except to protect the “interest” of the United States.

Giuliani insisted to Fox News that the executive order is not a “Muslim ban” because it “focused on, instead of religion, danger — the areas of the world that create danger for us.”  Giuliani said that this “is a factual basis, not a religious basis.”

Trump Administration officials and Republican leaders have emphasized that the order does not specifically mention Muslims, and simply refers to “aliens” from the seven countries “of concern” previously listed by President Barack Obama in section 217(a)(12) of the Immigration and Nationality Act, 8 U.S.C. 1187(a)(12).

The order, however, gives preference to non-Muslims.

Trump’s executive order states that after the travel ban is lifted, the United States will “prioritize refugee claims made by individuals on the basis of religious-based persecution, provided that the religion of the individual is a minority religion in the individual’s country of nationality.”

Since all seven countries are majority Muslim, this language gives preference to Christians and other non-Muslims.

But the order does not restrict travel from the countries where the 9/11 attackers came from: Saudi Arabia, United Arab Emerates, Egypt, and Lebanon.

The order also exempts some Muslim majority countries where the Trump family has declared business interests,  including Turkey and the UAE.