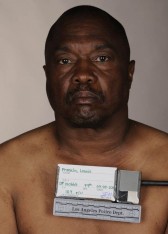 The long-awaited ‘Grim Sleeper’ serial killer trial gets underway in Los Angeles on Tuesday, nearly six years after police arrested the man they say preyed on numerous troubled, young, black women — some of them prostitutes —  in South Los Angeles from 1985 through 2007.

Lonnie L. Franklin, Jr., 63, a former garbageman and backyard mechanic, stands accused of killing at least 9 women, and the attempted murder of one more, ranging in age from 15 to 35.  The crimes for which he is charged took place in place in spurts that were over a decade apart, resulting in the “Grim Sleeper” nickname for the period of apparent inactivity.

According to the LA Times, Franklin was arrested in July 2010 after then California Attorney General Jerry Brown approved a controversial DNA testing procedure that allowed authorities to check whether a suspect’s DNA partially matched anyone in the state’s DNA database.  When police checked DNA recovered from a Grim Sleeper crime scene against the database they received a partial match to man named Christopher Franklin, Lonnie’s son.  Police then focused their attention on Lonnie, following him to a local pizza parlor where they obtained a sample of his DNA from a half-eaten pizza crust and a drinking glass.  Franklin’s attorney is challenging the seizure of his clients DNA on 4th Amendment grounds.

In addition to DNA, prosecutors say ballistic tests matched slugs taken from the crime scenes to a .25 caliber handgun found in Franklin’s home on the day he was arrested.  The lone surviving victim, Enietra Washington, has also identified Franklin as her attacker, according to KTLA.  Washington escaped after being sexually assaulted and shot in the chest with a .25 caliber pistol.

Authorities suspect Franklin may be guilty of dozens of additional crimes.  When they searched his home after his arrest they discovered pictures of at least 180 women, in various poses and states of undress.  They have since accounted for a majority of the women in the photos, but indenties and whereabouts of 30 of the women still remain a mystery.

The case has received a lot of media attention in Los Angeles and the HBO documentary, Tale of the Grim Sleeper, tracks the case in the aftermath of the arrest and the run up to trial, with filmmaker Nick Broomfield interviewing Franklin’s former neighbors and some prostitutes who crossed paths with Franklin over the years.  The film also addresses some of the criticism the LAPD received amongst some South Los Angeles residents for failing to inform the community sooner that it had a serial killer on the loose.

The trial is expected to last three months.