Ted Cruz Says He Would Have Picked His Boss for U.S. Supreme Court 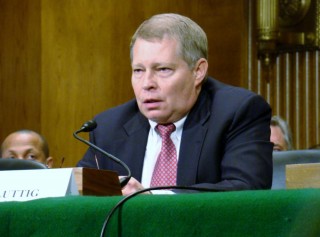 Tensions between Senator Ted Cruz and Donald Trump once again bubbled over during Saturday night’s debate on CBS News. Cruz accused the real estate magnate of wanting to appoint liberal judges. Trump fired back accusing Cruz of being a John Roberts supporter for the U.S. Supreme Court. The Bush appointee has come under fire by conservatives for veering too far to the left on the Court.

Cruz was a law clerk for Judge Luttig in June 1995 through 1996. Luttig served on the U.S. Court of Appeals for the Fourth Circuit until 2006. Cruz took the coveted clerkship immediately following his graduation from Harvard Law School. Cruz and Luttig had a close, emotional connection because Cruz came to work for the federal judge just one year after Luttig’s father was murdered by a carjacker in Texas, according to The New York Times.

“Something that horrible creates some personal bond,”  John Wood, another clerk for Luttig told the New York Times. Cruz has described Luttig “like a father to me.”

Judge Luttig, was part of the panel, who delivered a ‘sharp rebuke‘ to President Bush by barring the transfer of Jose Padilla from military custody to civilian law enforcement. Padilla was eventually convicted for aiding terrorists in federal court.  Luttig left the court to take an executive position at The Boeing Company.