Nevada Governor Brian Sandoval Says No Thanks to Supreme Court 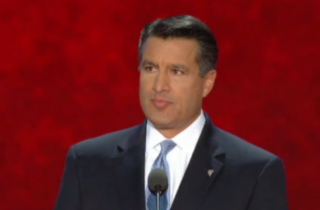 Earlier this week, it had been reported that the White House was considering GOP Governor Brian Sandoval of Nevada as a potential Supreme Court nominee. Well, it turns out Sandoval wasn’t interested, essentially saying “Thanks, but no thanks,” on Thursday.

Sandoval announced in a statement, “I notified the White House that I do not wish to be considered at this time for possible nomination to the Supreme Court of the United States…[t]he notion of being considered for a seat on the highest court in the land is beyond humbling and I am incredibly grateful to have been mentioned.”

It is unknown who else President Obama may be considering for the position, or if any other Republicans are in the running.