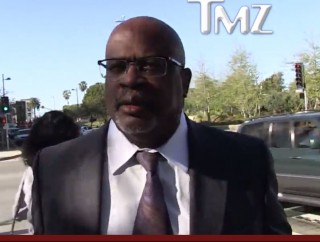 Former Deputy Los Angeles District Attorney, Christopher Darden, who played a key role in the O.J. Simpson prosecution, told a TMZ reporter that he hasn’t watched the new FX series, The People v. OJ Simpson series, and he has no plans to. In fact, Darden seemed pretty hostile towards the whole thing.

“I’m not part of it, they didn’t talk to me,” Darden said, as he walked away from the TMZ reporter.

“I think you have a production done, I’ll say this, basically non-black writers, non-black producers then you want to take this iconic trial with these black lawyers and talk about race,” Darden said, “I don’t see how you talk about race without including the people that are most affected by it.”

Darden left the Los Angeles District Attorney’s Office in 1995 to become a professor, and go into private practice. In a controversial 2012 NBC interview, Darden accused  Simpson’s attorney the late Johnnie Cochran of “manipulating” one of the infamous gloves that prosecutors say linked Simpson to the murder of his ex-wife Nicole Brown Simpson and Ron Goldman.

“I think Johnnie tore the lining. There were some additional tears in the lining so that O.J.’s fingers couldn’t go all the way up into the glove,” Darden said during a 2012 panel discussion at Pace Law School