Lawsuit: Pro-Choice ‘Sidewalk Counselors’ Should be Allowed to Work Near Planned Parenthood 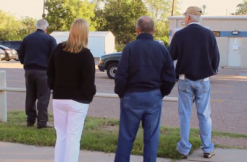 In a win for pro-life proponents, federal judges have reinstated a lawsuit against the City of Pittsburgh on June 1. This complaint fights an ordinance that prohibits demonstrations and the like within fifteen feet of certain healthcare facilities. Sounds basic until you know the plaintiffs had been doing “sidewalk counseling” outside of a Planned Parenthood. They try to convince pregnant patients not to have abortions.

These “counselors” claim the buffer zone hindered their freedom of speech.

“Plaintiff [Julie] Cosentino stated that on one occasion a clinic escort ‘yelled loudly’ at her while she was speaking with a young woman outside of the buffer zone, and multiple clinic employees then ‘surrounded the young woman’ and led her into the clinic (App. at 58a-59a.),” the opinion reads. “On another occasion, Plaintiff [Cynthia] Rinaldi stated that a security guard stifled her speech outside of the buffer zone while she was discussing adoption options with a young woman.”

Lead plaintiff Nikki Bruni is affiliated with the pro-life group, 40 Days for Life.

The judges made clear they’re only ruling on procedural grounds, telling the District Court to rule on the standards set by McCullen v. Coakley, a Supreme Court case about similar buffer zones in Massachusetts.

“Again, nothing in this opinion should be construed as a conclusion about the ultimate merits of the claims or defenses advanced by the parties,” the opinion states. “There are not enough facts in the record for us to make any such comment, even were we so inclined. That is the problem.”

In their original lawsuit, the plaintiffs fought the ordnance citing the First and 14th Amendments, but the appellate judges thought their case had more to do with free speech than due process. So to clarify the obvious, the lawsuit will only proceed with First Amendment claims as fuel.
–