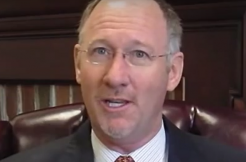 An actual lawmaker says he’s smuggled drugs across state lines. Georgia state representative Allen Peake has recently admitted, point blank, that he has slipped medicinal marijuana from states where it is legal into Georgia. That’s a federal crime. And he’s a Republican. Who knew conservatives had it in them.

“I got a text this morning from the mother of a young child who I delivered product to,” said Peake in an interview with Jim Galloway of the Atlanta Journal-Constitution.

“We’re on the record,” said Galloway.

“And the heartfelt thanks from this mother,” Peake continued. “The difference in this child, the increase in cognitive ability, the reduction in seizures, has been worth every bit of risk that I’ve taken,” the lawmaker said about his smuggling medicinal marijuana over state lines.

Lawmakers have long debated over making medical marijuana legal, but cannabis has been reported as an effective treatment for seizures, chemotherapy symptoms, and nerve pain. More and more states have decriminalized or legalized it. On top of that, Colorado okayed recreational use in 2012.

But even though Georgia Gov. Nathan Deal signed a law in December giving limited protection to those who use or administer medical marijuana, there’s no way to buy “product” in-state. No immediate fix exists for that. Bringing it across state lines breaks federal law. Hell, mere possession is enough to get charged by the feds.

Peake has already introduced House Bill 722, which would expand the number of conditions for which doctors can prescribe cannabis oil. More importantly, the bill also pushes for two to six in-state manufacturers who’d make all of the in-state medical cannabis. His intent is to keep caregivers, who might be tempted to cross state lines for “product,” out of trouble. Remarkably, Peake gathered over 100 signatures from other House members as of Jan. 20.

“Everybody has to make their own decision,” said Gov. Deal. “I would point out, however, that in the truest tradition of civil disobedience—Gandhi, Martin Luther King, Jr.—the real emphasis of civil disobedience is accepting the punishment to what you consider to be unjust. I’ll leave it at that.”

No charges have been announced against Peake, and any investigation would likely be federal since he admitted to crossing state lines. Which charges he’d face depends on how much he is alleged to have carried. For example, even having less than 50 kg of marijuana can be a felony since the feds might argue he’d try to sell it. That’s a possible 5-year sentence for a first offense.