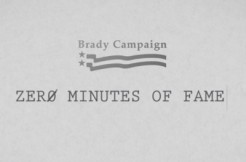 Mass Shooters. Point at a massacre, and you probably know the name of who did it. If you don’t, a quick Google search will answer that question. After all, it’s not breaking news that perpetrators get more press time than victims. A new, free browser extension for Chrome aims to change that.

It’s called “Zero Minutes of Fame.” Released on Thursday by the Brady Campaign To Prevent Gun Violence, it tries to replace the names and images of mass shooters on the Chrome web browser. In their announcement, they said 30 percent of mass shooters and 22 percent of school shooters were copy cats.

LawNewz.com tested it on a laptop with Windows 10. Results may vary from system to system, but we thought the program needs more development despite its intriguing premise.

It can work well in certain contexts. Consider an ABC story with a headline that mentions the Sandy Hook Elementary School shooter. With the extension, the headline would now read “5 Disturbing Things We Learned Today About Sandy Hook Shooter (name withheld out of respect for the victims).” The program also scours text on the rest of the page.

The program worked well enough on tests at ABC.com and Biography.com, but it isn’t perfect. It can take a moment to kick in, so the shooter or alleged shooter’s name is still visible for a moment. Also, it only seems to work on full names, not first or last names alone. Though to be fair, it’d be very difficult to make program code that’d safely exclude people with similar names.

Sometimes “Zero Minutes of Fame,” doesn’t work at all. For example, we ran the same name through YouTube. It didn’t work. Neither on the search results nor the videos. The name remained clearly visible.

Then there’s the problem of middle names. The man who allegedly shot up a government building in San Bernardino with his wife on Dec. 2 has a middle name. We put him in Google, and it blocked his full name. But take away the middle name, and he pops up again.

And no, it doesn’t work on LawNewz.com for some reason. We tried the names of the alleged Planned Parenthood shooter and the San Bernardino shooter’s full name. Their names remained visible.

A video announcement also promised that pictures of shooters would be replaced by that of victims. We didn’t see it work on any of our test pages.

Spokesman Brendan Kelly told LawNewz.com that they had no immediate plans to bring the program to other browsers like Firefox or Microsoft Edge, but they were “hopeful” it would happen in the future. LawNewz.com followed up later about the performance issues, but have yet to hear back from The Brady Campaign.

The Brady Campaign is a gun control organization. It also started a petition asking media outlets to stop reporting the names, images, and motives of shooters.

[image via The Brady Campaign]
–