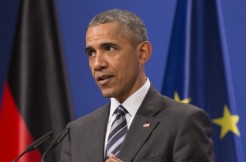 The plaintiff, 28-year-old Capt. Nathan Michael Smith, called ISIS an “army of butchers,” according to The Associated Press. But he still wants Obama to request a new Authorization for the Use of Military Force. Smith said the war against ISIS currently violates the War Powers Resolution.

“This lawlessness has made it impossible for Capt. Smith to determine whether his present mission is inconsistent with his oath to ‘preserve, protect and defend the Constitution of the United States,’ thus requiring him to seek an independent determination of this matter from the court,” his suit, obtained by the AP, stated.

The Obama Administration is using congressional authorization passed under President George W. Bush, but that was aimed specifically at the perpetrators of 9/11. Despite several proposals to authorize war specifically against ISIS, Congress as a whole hasn’t pushed for it.

Smith is being represented by Bruce Ackerman, a Yale Law School professor, and David Remes, an attorney for some detainees at the Guantanamo Bay detention camp.

“We want to get this back on the agenda,” Ackerman told The New York Times. He said that Smith contacted him after reading one of his articles. Ackerman has publicly argued before that the current war against ISIS is illegal without congressional approval.

“As the rise and rise of Donald Trump suggests, future presidents may make aggressive use of their powers as commander in chief—and they will predictably point to Obama’s unilateral war on ISIS to justify their own military adventures,” he wrote in a 2015 article for The Atlantic.

ISIS—also known as ISIL or the Islamic State of Iraq and the Levant—is a religious militant group that controls territory in Iraq and Syria.