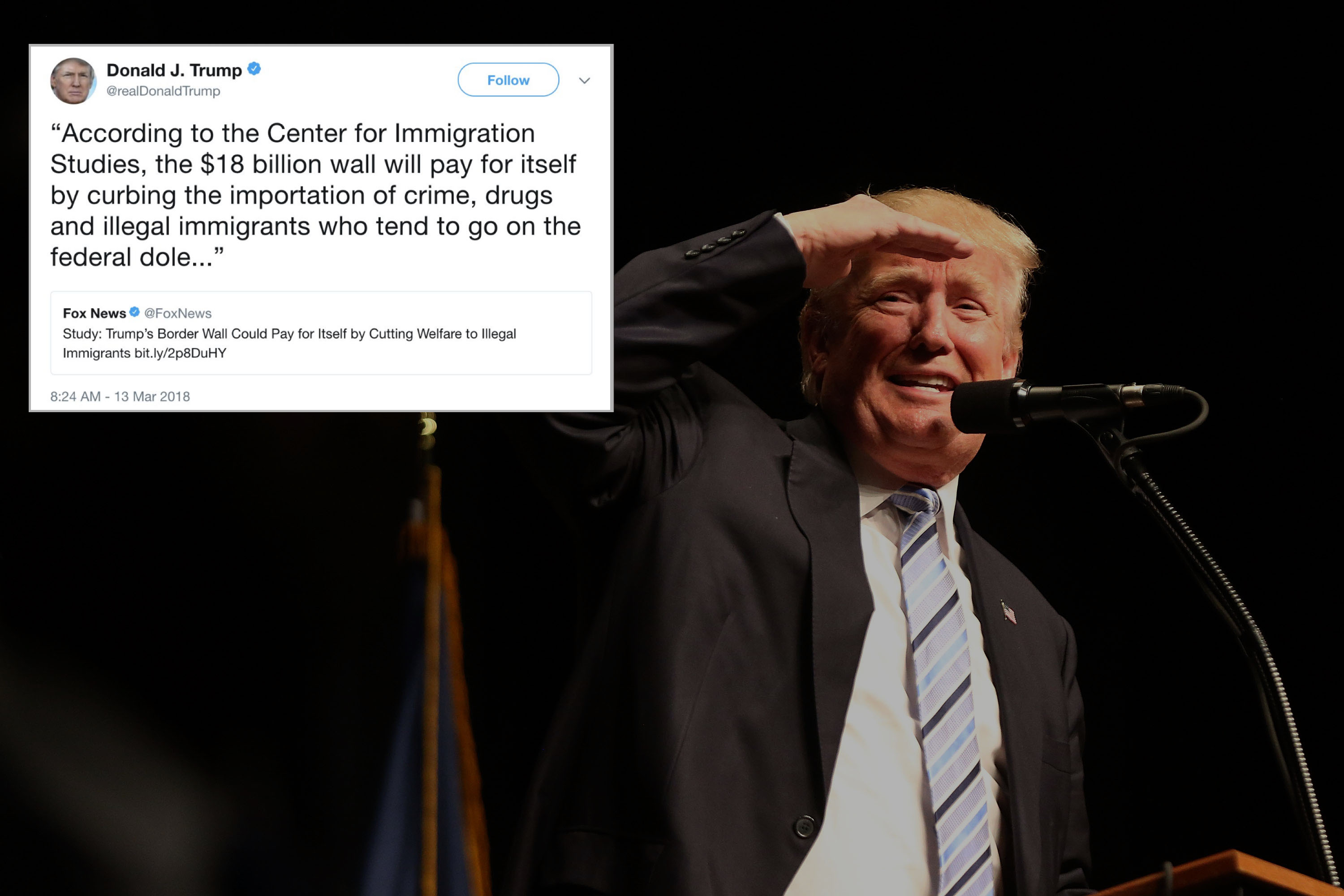 President Donald Trump was criticized on Tuesday for tweeting statistics compiled by an anti-immigration organization designated as a hate group by a leading civil rights watchdog.

In the midst of a series of posts about immigration, the proposed border wall and California’s legal status as a sanctuary state, at 8:24 a.m. Trump tweeted:

According to the Center for Immigration Studies, the $18 billion wall will pay for itself by curbing the importation of crime, drugs and illegal immigrants who tend to go on the federal dole…

“According to the Center for Immigration Studies, the $18 billion wall will pay for itself by curbing the importation of crime, drugs and illegal immigrants who tend to go on the federal dole…” https://t.co/NdLC6jZwWE

The second aspect of the above claim–regarding the alleged propensity of immigrants to access legal welfare benefits–linked to by Trump is controversial in the extreme.

Originally sourced to the Center for Immigration Studies (“CIS”), the claim is frequently shared by proponents of reduced immigration. In response to the popularity of the claim, the underlying research was debunked as misleading by the Center for Law and Social Policy (“CLASP”) in 2017.

But the problem with Trump’s use of statistics from CIS is not simply their reliability as a source, according to Vox journalist Carlos Maza who noted the bigger issue in his tweet calling Trump out.

In 2017, CIS was officially designated as a hate group by the Southern Poverty Law Center. Maza noted a few instances cited by the SPLC as to why CIS was tagged with their official designation.

Of note, in January 2017, CIS promoted an anti-Semitic article written by Kevin MacDonald which asked why “Jewish organizations” are promoting “the refugee invasion of Europe.”

Various additional instances of CIS’ racially and ethnically insensitive posture were catalogued as well. In one instance cited by Maza, the SPLC notes:

In June 2016, CIS distributed an article from John Friend, a contributing editor of the anti-Semitic The Barnes Review, claiming that “so-called refugees are committing rape and other horrific crimes against European women and men in increasing numbers.” Friend once described the Holocaust as a “manufactured narrative, chock full of a wide variety of ridiculous claims and impossible events, all to advance the Jewish agenda of world domination and subjugation.”

In response to the SPLC’s designation as a hate group, CIS defended itself.  CIS’ Executive Director Mark Krikorian insists that CIS’ incidents of promoting white nationalists and anti-semites is accidental–that after they are published by CIS, some “writers…turned out to be cranks.”

Oppositely, Krikorian has repeatedly defended the work of Jason Richwine, a National Review contributor and blogger for CIS. Richwine once asserted that Latino immigrants are less intelligent than “native whites” and has previously contributed to Richard Spencer‘s online periodical Alternative Right.