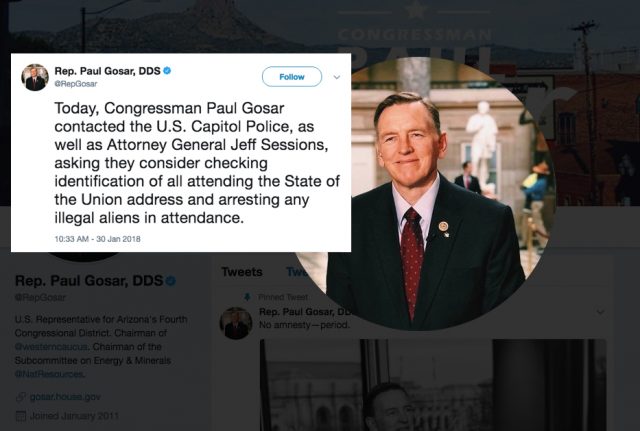 A congressional Republican requested that U.S. Capitol Police check the immigration status of State of the Union guests and arrest any undocumented immigrants who attend tonight’s speech.

Representative Paul Gosar (R-AZ), who is also a dentist, tweeted about his law enforcement request in the third-person mid-morning on Tuesday. The proud dentistry professional, whose Twitter handle references his dental degree, wrote:

Today, Congressman Paul Gosar contacted the U.S. Capitol Police, as well as Attorney General Jeff Sessions, asking they consider checking identification of all attending the State of the Union address and arresting any illegal aliens in attendance.

Representative Gosar then chimed in to his original tweet and added the following clarifying information, “Additionally, Congressman Gosar asked that they arrest those using fraudulent social security numbers and identification to pass through security.”

A later tweet–not threaded into the two original third-person tweets–retained the self-referential perspective and added the congressman’s direct words inside quotation marks. He wrote:

“Of all the places where the Rule of Law needs to be enforced, it should be in the hallowed halls of Congress. Any illegal aliens attempting to go through security, under any pretext of invitation or otherwise, should be arrested and deported,” said Congressman Gosar.

Reaction to Gosar’s suggestion was highly negative–at least one member of Gosar’s own party mildly criticized the statement. Outgoing Arizona Senator Jeff Flake—who solidly votes Republican–signaled his own virtue by quote-tweeting Gosar’s offending tweet with the caption, “This is why we can’t have nice things…”

In response, Gosar quote-tweeted Flake’s words right back, writing, “This is why you got forced out of office.”

Law&Crime reached out to Gosar for information on the response to his suggestion but no response was forthcoming at the time of publication.