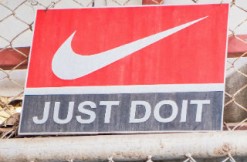 The undisputed king of sports apparel is not happy with the undisputed king of sports entertainment at the moment. Last Tuesday, June 26th, Nike filed an opposition (PDF) to World Wrestling Entertainment’s application for trademarking the catchphrase “Just Bring It” for clothing. Under its previous name of World Wrestling Federation Entertainment, WWE had previously held a similar trademark that the company applied for in 2001 and received approval for the following year, but it was cancelled in 2009 because the proper paperwork was not filed within the statutory six year deadline that the US Patent and Trademark Office provides. “Just Bring It,” originally the catchphrase of Dwayne Johnson in his pro wrestling persona, “The Rock,” was also the subtitle for a WWE video game.

When it comes to getting a new trademark of the phrase for use on clothing, though, Nike isn’t having it. “Opposer has continuously used the JUST DO IT Mark in interstate commerce since at least as early as 1989 in connection with various clothing items,” they write. The argument is, basically, that the marks are too similar, are likely to cause confusion and that Nike has won similar cases in the past. Somewhat amusingly, one of the cases Nike cites is one where they successfully blocked the registration of a trademark for “Just Jesu It.” Yes, as in The Jesuits.

While it likely has nothing to do with this trademark opposition, it’s worth noting that WWE is an equity partner in TapOut, the mixed martial arts lifestyle brand turned athletic apparel company. So they now compete with Nike in ways they did not before.