Wow, Justice Sotomayor Kind of Agrees With Justice Thomas on a Gun Case! 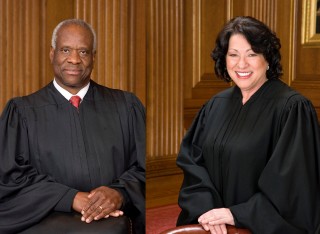 A case that garnered much less attention than the other two major Supreme Court rulings on Monday saw a rather unusual pairing of Justice Sonia Sotomayor partially joining the dissent of Justice Clarence Thomas in a federal firearms statute case.

In the case of Voisine et al., v. United States, two men from Maine challenged their convictions under 18 U. S. C. §922(g)(9) that extended the federal prohibition on firearms possession by convicted felons to persons convicted of a “misdemeanor crime of domestic violence.”  Each man had previously pleaded guilty to assaulting their significant others in violation of §207 of the Maine Criminal Code, which makes it a misdemeanor to “intentionally, knowingly or recklessly cause[…] bodily injury” to another.  After those state convictions, both men were later found to be in possession firearms and ammunition and charged under the above mentioned provisions of the federal felon in possession of firearm statutes.  According to the opinion, both men challenged their federal convictions on the grounds that “because their prior convictions could have been based on reckless, rather than knowing or intentional, conduct and thus did not quality as misdemeanor crimes of domestic violence.”

Writing for the majority 6-2 opinion, Justice Elena Kagan rejected the challenge, stating, “Congress’s definition of a ‘misdemeanor crime of violence’ contains no exclusion for convictions based on reckless behavior. A person who assaults another recklessly ‘use[s]’ force, no less than one who carries out that same action knowingly or intentionally.”  She added, “The federal ban on firearms possession applies to any person with a prior misdemeanor conviction for the ‘use . . . of physical force’ against a domestic relation…. That language, naturally read, encompasses acts of force undertaken recklessly—i.e., with conscious disregard of a substantial risk of harm…. We accordingly affirm the [convictions].”

Justice Sotomayor joined Justice Thomas in Parts I and II of his dissenting opinion in which he argued that the majority opinion is overly broad in its determination of what constitutes “use of force.”  Thomas writes, if Congress intended for the majority’s argument to prevail, it would’ve written the statute differently and “used language tracking the Model Penal Code by saying that a conviction must have, as an element, ‘the intentional, knowing, or reckless causation of physical injury.’”

Thomas concluded this portion of his dissent, stating, “But Congress instead defined a ‘misdemeanor crime of domestic violence’ by requiring that the offense have ‘the use of physical force.’ And a ‘use of physical force’ has a well-understood meaning applying only to intentional acts designed to cause harm.”

Justice Sotomayor, however, did not join in Part III of his dissent in which he argues that the majority’s opinion too easily strips (for life) a person’s right to keep and bear arms under the 2nd Amendment.  As example, Thomas writes, “A mother who slaps her 18-year-old son for talking back to her—an intentional use of force—could lose her right to bear arms forever if she is cited by the police under a local ordinance. The majority seeks to expand that already broad rule to any reckless physical injury or nonconsensual touch. I would not extend the statute into that constitutionally problematic territory.”