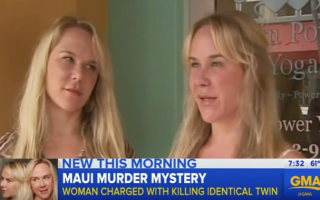 A yoga instructor is charged with second degree murder for the death of her identical twin sister, after driving their car off a cliff in Hawaii, ABC News reported.  Alexandria Duval was allegedly driving, when eyewitnesses claim she and her sister Anastasia, who was also her former business partner, got into a physical altercation in the car. One onlooker said the passenger was grabbing the driver’s head, while the two argued.

Prosecutors say that right before the car went off the cliff, there was a “hard acceleration” and “no attempts at braking,” which leads them to believe that Alexandria intentionally crashed the car.

LawNewz.com founder Dan Abrams and HLN’s Nancy Grace discussed the case on Good Morning America on Wednesday. Abrams argued that this sounds more like a manslaughter case than murder, saying that unless it was a murder-suicide, it doesn’t make sense that Alexandria would intentionally drive herself off a cliff to kill her sister. Grace seemed pretty confident in the case for murder, based on the details available, saying that the fact that Alexandria didn’t attempt to brake shows that she knew what she was doing.

Hawaii law defines second degree murder as when someone “intentionally or knowingly causes the death of another person” Manslaughter, on the other hand, is when someone “recklessly causes the death of another person,” “intentionally causes another person to commit suicide,” or, as a defense to a murder charge (like in this situation), an offense can be reduced to manslaughter if  it’s shown that the person acted “under the influence of extreme mental or emotional disturbance for which there is a reasonable explanation.”

As Abrams said, they were fighting in the car when Alexandria stepped on the gas. While it may have been an intentional act, there could have been an “extreme mental or emotional disturbance” that would make this manslaughter. A defense attorney would likely argue that this may not even have been intentional at all. The two of them were fighting in the car, and they were approaching a cliff. Maybe Alexandria meant to slam on the brakes, but being distracted by her sister, hit the wrong pedal. Not only would that account for not braking, it explains why there would be a hard acceleration before the car went over the edge. Right now it’s unclear, and in a criminal case, that can be the best defense.