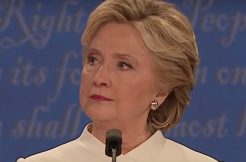 Democratic Party nominee Hillary Clinton seems to have a very clear stance on the Citizens United ruling. You heard it Wednesday night during the third presidential debate in Las Vegas.

“And I feel strongly that the Supreme Court needs to stand on the side of the American people, not on the side of the powerful corporations and the wealthy,” she said. “For me, that means that we need a Supreme Court … that will stand up and say no to Citizens United, a decision that has undermined the election system in our country because of the way it permits dark, unaccountable money to come into our electoral system.”

Hillary Clinton: We need a Supreme Court that will "say no to Citizens United" https://t.co/5uSPguwHjw #debatenight https://t.co/DjOTEwWzPE

Maybe she should pay a royalty to Bernie Sanders, her opponent in the Democratic primary. That kind of language didn’t originate with her. Wikileaks dropped another batch of emails on Thursday, purportedly hacked from the account of Clinton campaign chairman John Podesta. He made a certain suggestion more than a year ago on May 17, 2015. Sounds pretty familiar, actually.

I’ve tried this one before but in the democracy fight, I still think it’s stronger to say “I’ll appoint Supreme Court Justices who will protect the the [sic] right to vote and not the right of a few billionaires to buy elections.” Bernie has now linked Citizens United to Court appointments which may make this more or less desirable.

The 2010 Supreme Court ruling on Citizens United v. Federal Election Commission did not garner positive optics. Justices ruled that the McCain-Feingold act violated the First Amendment by prohibiting “corporate independent expenditures.” In other words, they equated cash with political speech, and this gave more leverage to moneyed interests in our electoral process. (Fun fact: Clinton was kind of involved in the case in a round-about way. The appellants were fighting to release a film that was critical of her.)

Sanders blasted the ruling when he announced his run for the presidency on April 29, 2015. Reminder from earlier: Podesta wrote his email soon after on May 17.

And yeah, Clinton has made it a pretty big part of her campaign since at least September 2015. This carried on through July 2016, when she proposed a constitutional amendment to overturn the ruling and “give the American people—all of us—the change to reclaim our democracy.” (This amendment, by the way, was never mentioned in Wednesday’s debate.)

We’ve reached out to the campaign for comment on the Wikileaks email and Clinton’s stance on Citizens United, and we will update when we hear back.