Deadliest U.S. Shooting Will Probably Not Count as Terrorism Under Current Law 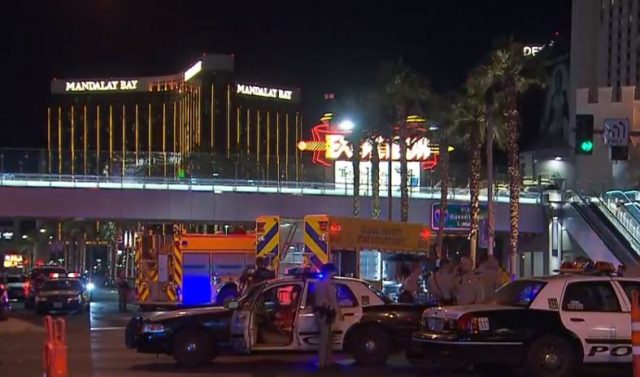 Sunday night saw the deadliest mass shooting in United States history, with the perpetrator opening fire on a crowd of concertgoers at the Mandalay Bay hotel and casino in Las Vegas. The suspect, who was found dead at the scene, was identified as Stephen Paddock. Attacks of this kind might immediately cause a person to think “terrorism,” but that doesn’t seem to be the case here. Yes, dozens were killed and hundreds were injured, and those who got out without physical harm are likely living in terror right now, but that doesn’t mean the act itself was terrorism.

So the question is: what’s the difference?

Generally speaking, it’s motive. While the effect may be the same, with mass casualties and people living in fear, the objective behind the attack determines whether or not it’s terrorism.

According to the National Institute of Justice, “terrorists commit acts for political gain.” So after Islamic jihadists attacked the World Trade Center and Pentagon, those were politically motivated attacks. Run-of-the-mill mass murderers, the NIJ says, typically have more personal feelings of being wronged, without looking to push a political agenda or create fear among a particular group.

Similarly, federal law defines terrorism as being intended to influence a government or intimidate a population. 18 U.S.C. § 2331 says that domestic terrorism “involve acts dangerous to human life that are a violation of the criminal laws of the United States or of any State” if they:

appear to be intended–

to intimidate or coerce a civilian population;

to influence the policy of a government by intimidation or coercion;  or

to affect the conduct of a government by mass destruction, assassination, or kidnapping;  and

occur primarily within the territorial jurisdiction of the United States.

This issue came up in the wake of the Charlottesville attack, which certainly appeared to have a politically-motivated intent to intimidate. At the time, CNN legal analyst Page Pate noted that despite the statutory definition of domestic terror, there’s no crime on the books for domestic terror (as opposed to just hate crimes or standard assault or murder).

“Congress needs to fix this law so federal prosecutors have the tools they need to treat groups that promote hate and violence as the terrorists they are,” Pate said, noting that the lack of legislation also resulted in  Charleston shooter Dylann Roof evading terrorism charges.

In this case, charges aren’t really an issue since Paddock is dead, but if he had survived, the lack of knowledge as to his motive make it tough to determine if he had the intent necessary for a terrorism charge. Paddock was known to local law enforcement, but he was not known to be connected to terror. Still, ISIS is now claiming responsibility and saying that Paddock had recently converted to Islam.

ISIS hasn’t given any evidence to support this. In addition, authorities are now saying that there is no evidence of ties to international terrorism.

Should more information come out to show that Paddock did have a political motive, his act could end up falling under the legal definition of domestic terrorism. However, as we’ve mentioned, there are no criminal penalties that would go along with such a characterization.

Note: This article has been updated for clarification.