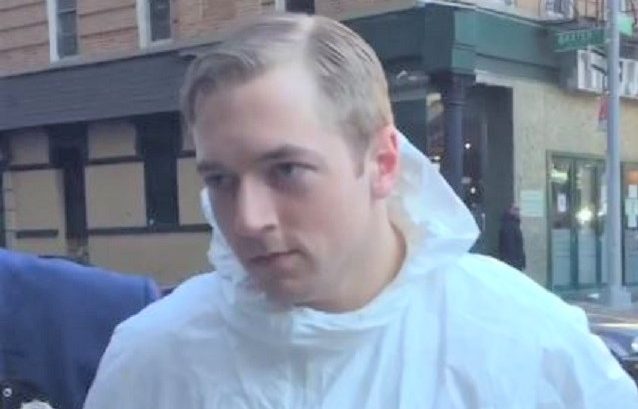 James Harris Jackson, an Army vet and self-proclaimed white supremacist, is charged with murdering 66-year-old Timothy Caughman with a sword last Monday in New York City. Jackson eventually turned himself in and admitted a racist motivation for killing the stranger, and in an interview with the New York Daily News, he apologizes–for not choosing a younger target.

“I didn’t know he was elderly,” Jackson said, saying his preference would have been to kill  “a young thug” or “a successful older black man with blonds … people you see in Midtown,” whatever that means. He explained that he traveled to New York from Baltimore with a plan to kill more people, with the goal of fighting against interracial relationships. He hoped white women would think, “Well, if that guy feels so strongly about it, maybe I shouldn’t do it.”

But after killing Caughman, he gave up his plan to go on a spree. Jackson told the News he “got depressed,” and said, “I didn’t want to put my family through any more pain.” He describes his family as “typical liberal Democrats,” and said his grandfather had crosses burned on his lawn in Louisiana because he was “very pro-integration.”

As for how he strayed from his liberal, peaceful upbringing, Jackson said, ““I guess it’s like anything — if something gets pushed on you too much, you reject it.”

Now incarcerated at the Rikers Island correction facility, with a population that’s 55 percent black, and a Department of Corrections staff that’s 65 percent black, Jackson said he’s received about 50 death threats. “I think I’m going to die here,” he said. “I don’t blame them, I’d feel the same if I were in their shoes.”

Update 3/27/17 4:40pm: Jackson has now been charged with murder as an act of terrorism, according to Rick Ritter of CBS Baltimore.

James Jackson hit w/ new charges of murder as an act of terrorism. Jackson is accused of traveling from Baltimore to NY to murder black men pic.twitter.com/MCkviBMK71