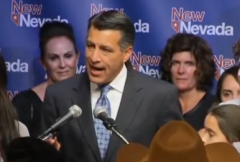 The White House is currently vetting Nevada Governor Brian Sandoval as a potential nominee for the Supreme Court, the Washington Post reports. Sandoval, a Republican who served as a federal district court judge before running for governor, was appointed by President George W. Bush and confirmed unanimously by the Senate. Prior to this, he was elected Nevada Attorney General in 2002.

Sandoval is known to be a centrist, siding with Democrats on issues such as abortion and the environment. He also considers the legalization of gay marriage to be settled law. He alienated Republican colleagues when he supported the Medicaid expansion that was part of the Affordable Care Act. Still he remained popular enough in the GOP for the party to encourage him to run for Senate against Democrat Harry Reid in this year’s election. Sandoval declined.

A Sandoval nomination to the Supreme Court would challenge Republican Senators such as Majority Leader Mitch McConnell, who have insisted that they will not confirm any nomination made by President Obama. It remains to be seen if they would stick to this decision should the nominee be of their own party.