What is the Constitution’s Emoluments Clause? 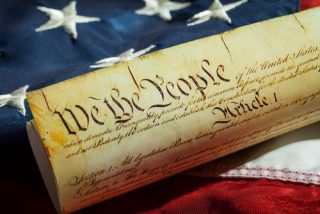 During the much-hyped press conference on Wednesday, Donald Trump‘s attorney disputed any claims that the President-elect would be violating the Constitution’s Emoluments Clause when he takes office.  As millions of people watched the press conference, many people wanted to know right away — what the heck she was talking about. What in the world is the Emoluments clause? It is a bit complicated so we tried to break it down.

So what is the Emoluments Clause?

“No title of nobility shall be granted by the United States: and no person holding any office of profit or trust under them, shall, without the consent of the Congress, accept of any present, emolument, office, or title, of any kind whatever, from any king, prince, or foreign state.”

So basically what this means is that federal officials are prohibited from being granted titles of nobility or accepting gifts from foreign government “without the consent of the United States Congress.”

Some legal experts believe if foreign leaders visit and choose to stay at one of Trump’s hotels like the one in Washington D.C., Trump benefits and this could be construed as a gift. While Trump may not be pushing foreign officials to stay at his hotel, a former Mexican ambassador has said that there will be a “temptation” for some to stay there just to tell Trump they’re at his hotel. The King of Bahrain has also decided to host a reception there. Therefore, these legal experts believe that scenarios like this could be in violation of the Constitution’s Emoluments Clause.

So could Trump be violating the clause?

Legal experts are divided on that, and whether the clause applies to the President at all.

In a recent academic article written by Prof. Norman L. Eisen, Chief White House Ethics Lawyer from 2009-2011, Prof. Richard W. Painter who held the same position from 2005-2007, and Harvard Constitutional Law Professor Laurence H. Tribe, the scholars contend the clause absolutely applies to the President, and that he could be violating the moment he takes office.

Eisen, Painter, and Tribe say that not only does the Emoluments Clause apply to the President, but that it “is an easy question.” They refer to a 2009 memo by the Justice Department’s Office of Legal Counsel that considered whether President Barack Obama‘s Nobel Peace Prize violated the Clause. While the OLC determined that it did not, the reason was due to the nature of the institution awarding the prize, and not because the Clause doesn’t apply to Presidents. In fact, the OLC memo recognizes that the “President surely ‘hold[s] an[] Office of Profit or Trust,'” as described in the Emoluments Clause.

“No prior president has come anywhere close to Mr. Trump in the scale of possible violations,” the article states. The reason, of course, is Trump’s international business empire, of which he will apparently remain owner while in office, even if he does intend to remove himself from business operations.

However, not all experts are in agreement. Seth Barrett Tillman, a legal scholar, who has spent 8 years actually studying and writing about this clause, told LawNewz all of these so-called experts have it completely wrong and are “wildly inaccurate.”

He said if they had thoroughly investigated this clause, they would have come to the same conclusion that he did: the clause doesn’t apply to the president. In fact, there is some pretty convincing evidence that it doesn’t. Take for example, President George Washington.

“George Washington was not stupid or dishonest. He took diplomatic gifts and he didn’t ask for congressional consent and he didn’t get it. If he didn’t follow the Emoluments Clause, there is no reason to think President Trump has to either,” Tillman, a lecturer at Maynooth University Department of Law told LawNewz.com in an interview.