We All Forgot About the Real Victim in ‘Making a Murderer’ 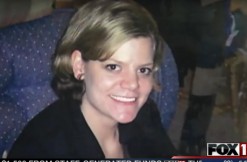 I remember the early days of November, 2005 vividly.

How could I not? A young woman just a few years younger than me had disappeared. I, a young local tv reporter, was assigned to accompany one of the many groups of people that were putting up flyers with her face on it, asking for anyone who knew anything to come forward.

Her name was Teresa Halbach.

I had no idea, as did the greater Green Bay community, that her face would become the backdrop of one of the most haunting murder cases we’d ever encounter.

I start with Teresa for a reason. Because lately, no one else seems to.

You may have heard of a recent Netflix series, “Making a Murderer”. It’s gone “viral” as everyone loves to say. It’s riveting. It’s full of twists. It’s making people angry, sad, frustrated. Some are even trying to petition President Obama to get involved and pardon the parties involved. Aside from the fact that that’s not exactly how the system works, the most troubling aspect to this entire story, at least for me, is that a young woman’s death has been treated as a mere plot device.

Let me tell you a little bit about Teresa.

She grew up in a small farming community in Calumet County, Wisconsin. One of five siblings in a close knit family, she was a 25 year old aspiring photographer. She loved karaoke. She coached her younger sister’s volleyball team. By all accounts, she was one of the nicest, most caring persons most had ever met. So when days went by without her family hearing from her, they were immediately alarmed.

They had no idea that the next several weeks of their lives would be a nightmare from which they’d never wake up.

I write this piece as one of the many journalists who covered her disappearance, and eventually, the trial of the two men convicted of murdering her.

I interviewed Steven Avery shortly after he was named as one of the last people to have seen Teresa alive. We stood in the darkness next to the red van that she’d been hired to photograph for Auto Trader magazine. He calmly answered my questions, even the one about whether he’d been asked to take a polygraph test. It was a pretty uneventful interview. It was only after documents were filed in the case that I learned I’d been standing on her remains as we conducted our interview.

That thought will never leave me.

I interviewed several of the Avery family members, including his brother Chuck, his mother, and some of his female cousins. This was before they stopped talking to the media.

I interviewed many, many people connected to the case.

However, the most important interviews for me were those with the Halbach family. They let me into their home after she’d officially been declared a missing person. I could feel the sadness, the fear they felt, the dwindling hope that maybe she’d be found alive and well. Still, they answered all of my questions. They told me about their beloved Teresa, about her passion for photography, her caring nature, her fun loving side.

Her brother Mike took on the incredibly difficult burden of being the family spokesperson. After every major court day, he’d dutifully take his turn in front of all the cameras and the microphones and patiently answer questions about the latest in the case. I asked him how he found the strength to do this day after day after day.

He replied, “to give Teresa the justice she deserves.”

That’s exactly what I am trying to do with this essay.

I, too, was outraged by what I saw in that Netflix series.

Teresa deserved more than the mere minutes they gave her on screen.

I’m not here to weigh in on whether I think Steven Avery or Brendan Dassey are guilty. My colleagues did a great job covering the legal aspects of the case and there are plenty of credible news outlets that are presenting evidence against Steven Avery that somehow, for reasons neither I nor my colleagues can understand, were left on the cutting room floor when this series was edited.

What I want to say is this:

Avery and Dassey may be serving life sentences behind bars but they’re alive.

Teresa was handed a death sentence 10 years ago.

She will never fall in love, get engaged, get married. She’ll never have a family of her own. She’ll never get to pursue that passion for photography.

Her dreams and her future died with her.

All her family have left are memories and the deep love they shared.

There is a victim in this case.

Her name was Teresa Halbach.

And she deserves better than this.