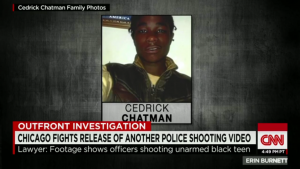 A federal judge ordered the release of a video in yet another police shooting in Chicago. This time, Cedrick Chatman, 17, was unarmed and running away from police when he was gunned down by an office in 2013. The city initially did not want to release the video, but had a change of course on Wednesday.

Chatman was shot by police during a foot chase that followed an apparent carjacking. The video is from a high school security camera. The release comes as a result of a wrongful death lawsuit filed by Chatman’s family.

Officer Kevin Fry told police, at the time, that he feared for the life of his partner, Officer Lou Toth, and fired four shots. The officer claimed that Chatman made a slight turn toward them, and he appeared to have some kind of weapon in his hand. Police later found out the object was an IPhone box.

The city has opposed the release of the video since 2013, however city attorneys filed a motion withdrawing their previous opposition. An internal  investigator ruled that the shooting was justified. But, that only came after another investigator, Lorenzo Davis, was fired, after he refused to change his findings to a justified shooting, according to CNN.

Here is the RAW video:

[skip ahead to 5:36 in the video to see the confrontation]