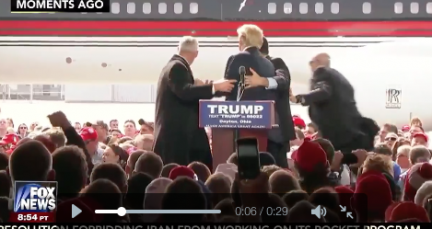 The Secret Service just rushed on stage to surround Donald Trump during a rally in Dayton, OH on Saturday morning.  There are conflicting reports about whether something was thrown on stage or if a protester actually tried to rush the stage.

Whatever happened, in the video you can see the quick response of the Secret Service agents that moved in to form a protective barrier around Trump  and then the GOP frontrunner went on to complete his remarks once the situation was back under control.

Here’s video of the incident: pic.twitter.com/7kHxqDQk3T